Getty Ex-Vikings kicker Kai Forbath worked out with the Bears.

Exactly how worried should we be about Eddy Pineiro? The Chicago Bears have been rolling with former Kansas City Chiefs kicker Cairo Santos, who has been less-than-impressive, and now, they’re checking out a new punter, long snapper, and a former rival kicker. 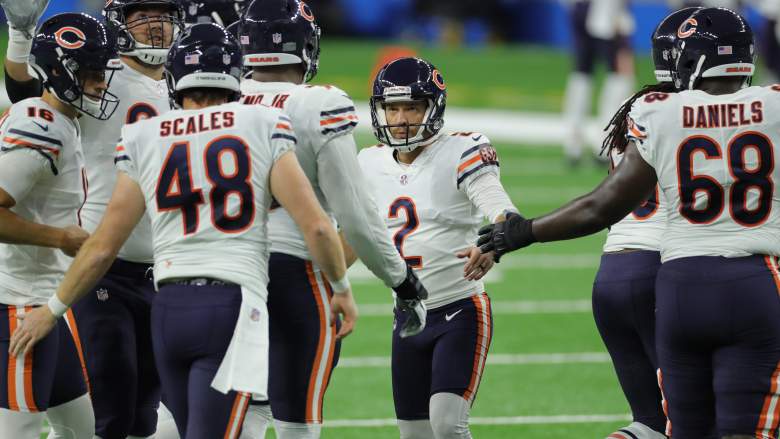 GettyKicker Cairo Santos of the Chicago Bears has missed two kicks in the last three weeks, and there are serious concerns about his range. (Photo by Leon Halip/Getty Images)

After a dreadful performance all around on special teams, it’s no surprise to see Chicago bringing in some new players to up the ante, competition-wise. Santos has hit five of his seven kicks, but he has struggled to hit anything longer than 40 yards, and watching him trot out onto the field has been unnerving, to say the least. He has missed two kicks in his last three games, and the Bears also had a punt blocked this past weekend by Colts linebacker Jordan Glasgow.

Forbath is an eight year vet who has played with six different teams, including Washington, Minnesota and Dallas. He has made 86.8 percent of his field goal attempts over his career, and 93.8 percent of his extra point attempts.

Pineiro, who won a much ballyhooed kicking competition last year, has a big leg, but he has yet to see the field. Bears head coach Matt Nagy said Monday he had no new update on Pineiro’s status, which means he’s very likely out against Thursday night against the Bucs.

Anderson played his college ball at Rutgers, and he was undrafted in the 2018 NFL Draft. He spent a little time at the Patriots’ mini-camp that year, but he never caught on with any of the 32 teams, and he sat the season out. In 2019, he signed with the Giants briefly before being waived prior to the season, so he has no NFL experience. Anderson averaged 44.4 yards per punt at Rutgers. Chicago’s current punter Pat O’Donnell is averaging 46.1 yards, and Sunday’s blocked punt wasn’t his fault, so his job is likely secure.

That should be equally true for current long snapper Patrick Scales. It wasn’t Scales’ missed assignment that led to the blocked punt (it was linebacker Joel Iyiegbuniwe’s), and it would be odd to see the team switch punters or long snappers mid-season, barring catastrophe. Still, the Bears brought in DePaola, who was the long snapper in Tampa from 2014-2016. He also played in Chicago before — he spent the 2017 season with the team before heading to Oakland the next year. He sat out the 2019 season after being released by the Raiders.

It wouldn’t be unusual for the Bears to drop Santos and sign Forbath if his tryout goes well — and considering his tryout is Wednesday, the team could add him to the roster as early as Thursday, when the Bucs come to town.

Loading more stories
wpDiscuz
0
0
Would love your thoughts, please comment.x
()
x
| Reply
The Bears are looking at all kinds of special teams players this week...