Getty QB Nick Foles of the Chicago Bears seems to have a bit of a miscommunication going on -- with Brian Griese and head coach Matt Nagy. (Photo by Jonathan Daniel/Getty Images)

Those who follow Chicago Bears football knew it was only a matter of time before the team turned to veteran Nick Foles after Mitch Trubisky was named the starter. As it turns out, it wasn’t long.

After a dismal second quarter in which he overthrew several receivers, Matt Nagy yanked Trubisky in favor of Foles with just under 10 minutes in the third quarter Week 3 against the Falcons. Foles immediately came in and led the team down the field, but wide receiver Allen Robinson lost a jump ball that turned into an interception in the end zone on the veteran quarterback’s first possession.

🚨 Nick Foles has entered the game for the Bears 🚨 pic.twitter.com/oDmwxaqJyK

With Trubisky under center, the Bears fell to a 26-10 deficit in the third, and while some of the team’s issues were his fault — numerous overthrows and a few bad decisions follow him everywhere, including a bad interception that led to his removal — the offensive line could not open up any lanes, and the defense looked as porous as it has looked in a long time.

Does This Move Signal the End of Trubisky’s Time as the Starter? 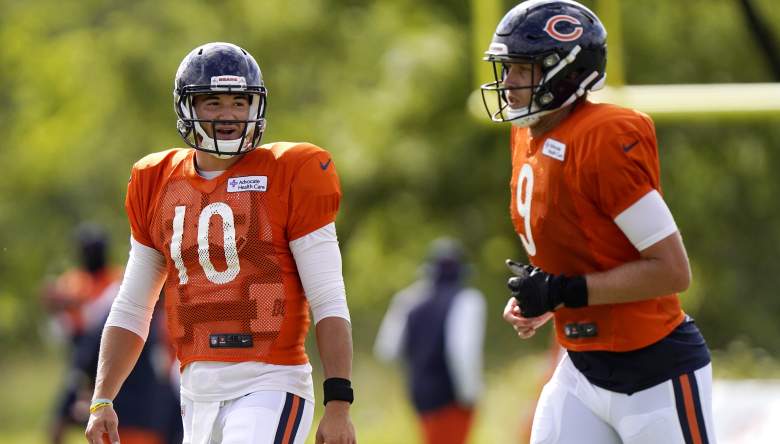 GettyMitchell Trubisky  of the Chicago Bears talks with Nick Foles during training camp. Trubisky was named the team’s starter prior to the season, but he didn’t make it through three games.

The move by Nagy to go to Foles so early in the season was a bold one, but it also says a good deal about how much confidence they have — or don’t have — in Trubisky. Nagy and the majority of the team’s new coaching staff already know Foles well — and they have a ton of trust in him.

It would be difficult for Chicago to go back to Trubisky now, wouldn’t it? Probably, but there’s a chance they still will if Foles bombs. Trubisky entered this game 2-0 as the team’s starter — but his mistakes have cost the team points in every contest so far this year, including his Week 3 showing against the Falcons.

But Foles has seen his work with the first-team offense cut short due to the shortened preseason, so it could take a little time for him to warm up. With Nagy pulling Trubisky so soon in the season, expect Foles to get that time moving forward.

Foles Leads Crazy Comeback in First Appearance as a Bear

Upon entering the game, Foles didn’t look all that impressive. A few of his throws were short or off just a bit, and there was the controversial interception on the jump ball to Robinson. Much of that could be rust, but it will be interesting to see how he responds now that he’s the man moving forward.

Foles eventually began moving the ball after entering the game, and he threw two passes that would have been touchdowns had Allen Robinson and Anthony Miller come down with them. He didn’t let those plays deter him, instead leading the Bears to a ridiculous come from behind 30-26 victory. Foles finished the game with 185 yards, three scores and the lone interception.

NICK FOLES, THERE GOES THAT MAN🔥