Getty Mitch Trubisky and Matt Nagy both had telling comments about the QB's tenure in Chicago.

Mitch Trubisky has three remaining regular season games with the Chicago Bears, and the fourth-year quarterback seems to be getting more open and candid than ever in his meetings with the media. Perhaps that’s because he’s more comfortable now that the coaching staff is implementing an offense and a run game more suited to his strengths, or perhaps it’s because he feels his days in Chicago may be numbered, but regardless, Trubisky has opened up in a big way lately.

The Bears are averaging over 30 points a game since Trubisky took over for Nick Foles Week 12, and while they have gone 1-2 in those games, that’s been more on the defense than the offense. Running back David Montgomery has also seen a resurgence since Trubisky has returned under center, averaging over seven yards per carry while notching his first two 100+ yards games of the season over the last three weeks.

When speaking with reporters Wednesday, Trubisky revealed he specifically requested Montgomery, rookie tight end Cole Kmet and wideout Allen Robinson got more involved in the offense, which they have done in recent weeks.

“I do feel comfortable,” Trubisky said. “After getting benched and then being able to go back in, this is just some of the things I’ve been asking for.”

Trubisky: ‘You Gotta Get the Ball to Your Playmakers’ 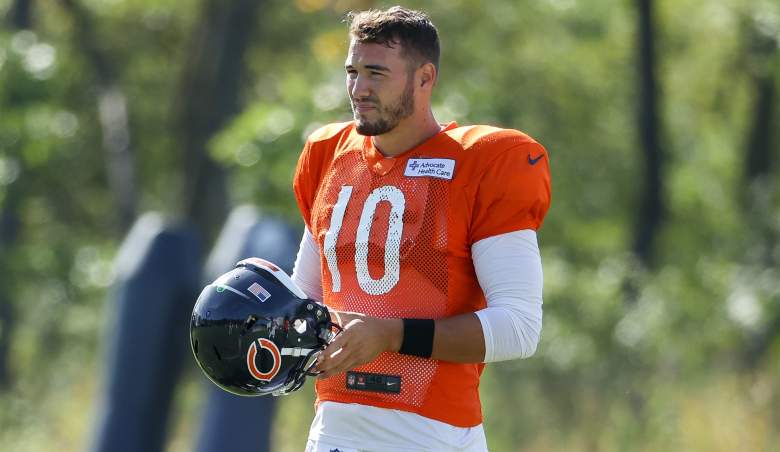 “I just thought it was a good idea to get Cole more involved, to get David more involved, to get A-Rob more involved,” Trubisky told the media. “You just gotta get the ball to your playmakers in space and stretch the field horizontally and vertically but also keeping the defense off balance, and I think the change in tempos really helps this offense. I think moving the pocket really helps me and helps our offensive line and also helps create run lanes.

“So these are things I’m very comfortable with, things I’ve been asking for and I think everyone’s buying into it and I think we’re starting to build an identity and we just need to keep getting better and better. When we play 11 guys as one and we’re playing as a unit and we’re executing, that’s when the good plays will continue to happen.”

Trubisky noting he has been asking for these things is noteworthy because it’s odd when head coaches and their offensive staff don’t listen to their quarterbacks, but apparently, that was the case in Chicago.

Mike Berman of NBC 5 Chicago asked Trubisky why he didn’t request these changes and adjustments to the offense earlier, — or did he ask for them, and the coaching staff just didn’t implement them? His answer, complete with a small grin, was quite telling:

“Yeah, that’s a good question. I guess you never know. I was asking, I was always putting my input in, um, but you can’t change the past, so we are where we are now and the offense is progressing over the last few weeks and all we can do is just try to stay on this path we are now and keep getting better. I can’t change the past, I can’t put myself back in the game weeks ago or anything like that, but it’s gotta continue with this constant communication and just having the open dialogue and always doing what is best for the Bears offense.”

Wow. So Trubisky, who has never been anything other than courteous and a genuine professional, is saying he was asking for more rollouts and bootlegs and to get the team’s best players the ball more — and it’s clear Matt Nagy had other designs for the offense in mind instead. It seems obvious to game plan around the strengths of your players, and it also should be a given that head coaches listen to input from their starting quarterbacks — but it’s equally obvious Nagy did neither.

It’s not overly dramatic to suggest that what happens the next three weeks will go far in determining the futures of Nagy, Trubisky, and the entire Bears franchise. Buckle up, Bears fans. The wild ride continues.

You can watch Trubisky’s entire interview with the media Wednesday below:

Loading more stories
wpDiscuz
0
0
Would love your thoughts, please comment.x
()
x
| Reply
It's obvious Trubisky and Nagy haven't been on the same page for a very long time...