Getty Inside linebacker Nick Kwiatkoski of the Las Vegas Raiders could be a salary cap casualty this offseason.

Linebacker Nick Kwiatkoski spent his first four seasons with the Chicago Bears, who selected him in the fourth round of the 2016 NFL Draft out of West Virginia.

Kwiatkoski endeared himself to many Bears fans in 2019, when he filled in for Danny Trevathan after the veteran starter went down with a gruesome elbow injury. Kwiatkoski wound up starting eight games that year, finishing with career-highs in sacks (3.0), tackles-for-loss (eight) and quarterback hits (three).

After the 2019 season, Chicago had a choice to make. Kwiatkoski had earned the chance to start, while Trevathan had been the established veteran starter. The team could only afford one. Kwiatkoski wound up signing a three-year, $21-million free-agent contract ($13.5 million guaranteed) with the Las Vegas Raiders in spring of 2020, while the Bears elected to stick with Trevathan, re-signing him to a three-year deal worth $21.75 million ($13.625 million guaranteed).

Now, some are predicting both linebackers will be released by their respective squads this offseason.

Trevathan, who turns 32 in March, has had a difficult time staying on the field recently. He appeared in just five games in 2021, and has played just one full season in the last three years. Sports Illustrated and The Athletic’s Kevin Fishbain both named the veteran LB as a likely cap casualty.

As for Kwiatkoski, after starting 12 games for the Raiders in 2020, an ankle injury sidelined him for half the season last year and now, there’s a growing sentiment the new regime in Vegas may choose to move on.

“Two guys to watch are linebackers Cory Littleton and Nick Kwiatkoski,” Paul Gutierrez of ESPN wrote on February 21. “They were signed to revamp the LB corps in 2020, and neither player has lived up to the hype, as Littleton was replaced by rookie Divine Deablo last season and a banged-up Kwiatkoski had all kinds of trouble staying on the field.”

The Athletic also listed Kwiatkoski as a player to watch as a potential cap casualty for the Raiders this offseason. If he’s let go, is a reunion with the Bears possible?

Kwiatkoski Was Productive During His Time in Chicago 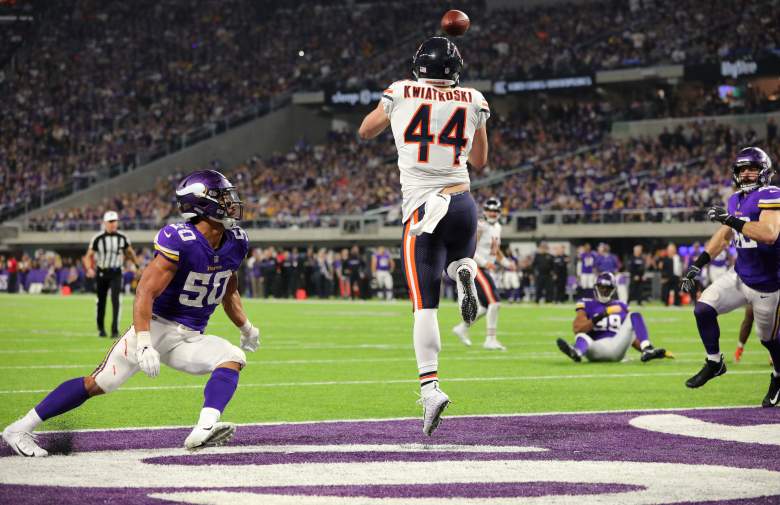 GettyNick Kwiatkoski spent four years with the Bears, and fans remember him fondly.

In his four seasons with the Bears, Kwiatkoski amassed 184 total tackles (139 solo, 13 for loss), 6.0 sacks, eight passes defensed, eight quarterback hits and a safety in 22 starts and 57 total games played.

With new head coach Matt Eberflus taking over and switching the defense from a 3-4 to a 4-3, Kwiatkoski would be a far better fit than Trevathan in the scheme. Kwiatkoski, who turns 29 in May, is far superior to Trevathan in pass coverage and has also proven to be better in his gap responsibilities. He’s younger, quicker and a hard-hitter with an excellent team-first attitude.

“I’m a guy that, whatever it takes, I want to play and I want to be on the field,” Kwiatkoski told Tashan Reed of The Athletic in May of 2020. “If that means being a special teams guy or starting or whatever it is, I’m gonna do it. I just take pride in that. Whatever position you’re playing, you prepare.”

The only question is whether Eberflus and company would be interested. With former Kansas City Chiefs linebacker Anthony Hitchens hitting the market, Eberflus, who has a history with Hitchens, may seek out familiar former players. But with Trevathan likely on the way out, keep an eye on Kwiatkoski as a dark horse replacement.