Getty Robert Tonyan of the Green Bay Packers reacts toward Eddie Jackson of the Chicago Bears after catching a pass for a touchdown.

Tight end Robert Tonyan is one of the most intriguing unrestricted free agents on the market this offseason.

Tonyan had a breakout season with the Green Bay Packers in 2020, but now, he may be heading out the door. According to Spotrac’s 2022 salary cap tracker, the Packers are 31st out of 32 teams in available cap space (they’re currently $-28,251,758 in the hole) and they still have to pay top wideout Davante Adams while also likely making Aaron Rodgers the highest-paid quarterback in football.

Adams will likely get the franchise tag, which should be around $19 million, and insider Ian Rapoport reported on February 28 that Green Bay was working on an “expensive” deal with the reigning MVP.

So where does this leave Tonyan, who looked like one of the best tight ends in the game in 2020 before going down with an ACL tear last year? Some think it’s possible Tonyan could follow new Chicago Bears offensive coordinator Luke Getsy to the Windy City.

Tonyan Could Be Low-Risk, High-Reward Signing

Kristopher Knox of Bleacher Report pegged Tonyan as the best “potential bargain” available at the position in free agency this offseason, and Knox named the Bears the best fit for the tight end, who turns 28 this spring.

“Tonyan represents a classic risk-reward option in free agency,” Knox wrote on February 28. “He suffered a torn ACL in late October and might not be at 100 percent to start the season. He also has just one year of high-end production on his resume. However, Tonyan was impressive in both 2020 and in 2021 before the injury.”

Bears TE Cole Kmet is coming off career highs in receiving yards (612) and receptions (60), but Kmet was held out of the red zone the entire season, and adding a threat with hands like Tonyan’s could make the Bears’ tight ends room far more interesting — and competitive. 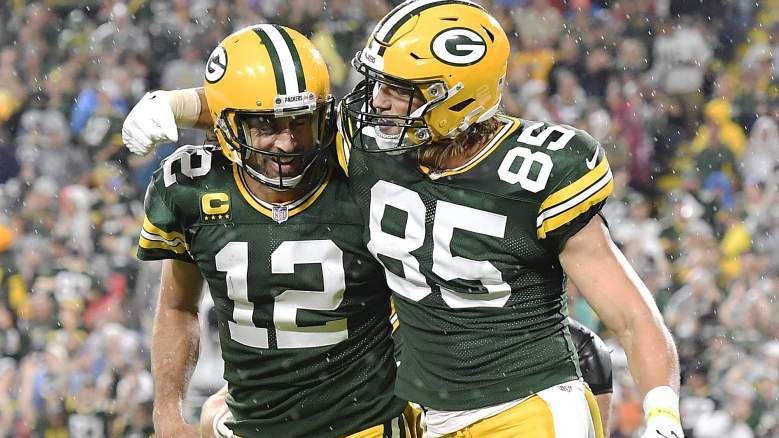 GettyRobert Tonyan has been a top target for QB Aaron Rodgers over the last two seasons.

Quarterbacks had a passer rating of 147.6 when throwing his direction that year, and he also caught eight passes and a TD in the playoffs. Tonyan averaged 4.2 yards of separation when targeted in 2020, which was first among all TEs and second among all pass catchers, per Pro Football Network.

He had 204 yards receiving and two touchdowns (and 106.1 passer rating when targeted) in eight games before going down with the knee injury last season. He may not be ready to go right away when the 2022 season begins, which is why he may be willing to sign a cheaper deal.

What Is Tonyan’s Projected Contract in 2022?

PFF has Tonyan projected to sign a one-year, $5.5 million “prove it” deal with $3.75 million total guaranteed next season. The Bears have the cap space for something like that, particularly considering both Jimmy Graham and Jesse James are likely out the door.

“Tonyan could pair with budding standout Cole Kmet to give second-year quarterback Justin Fields a pair of potent young pass-catching tight ends,” Knox reasoned in perhaps the best selling point. Kmet has shown promise at times, but he has yet to become the dominant pass-catching TE the Bears envisioned when they took him in the second round in 2020. If Kmet doesn’t work out, having a healthy Tonyan on board would be solid insurance.

Another reason Chicago might want to add Tonyan to the roster? It would be a great way to stick it to a top divisional rival.

Sports Illustrated named Tonyan Green Bay’s second-most important free agent on offense to retain after All-Pro Davante Adams, so the Bears inking him to a reasonable deal could be a win in multiple ways.

Robert Tonyan is from McHenry, Illinois, and grew up as a Bears fan. He would likely love to become a Chicago Bear.

Loading more stories
wpDiscuz
1
0
Would love your thoughts, please comment.x
()
x
| Reply
This would be the definition of a low-risk, high-reward signing for the Chicago Bears.