Getty QB Ryan Fitzpatrick of the Miami Dolphins celebrates his touchdown pass with Tua Tagovailoa #1, to take a 23-22 lead over the Las Vegas Raiders, during the fourth quarter

Veteran quarterback Nick Foles has been one of the bigger disappointments for the Chicago Bears this season. Foles took over for Mitch Trubisky in the third quarter of the Bears’ Week 3 game against the Atlanta Falcons, and he led the team to a dramatic fourth quarter comeback victory. Things only went downhill from there.

In his seven starts, Foles completed 65.4 percent of his passes for 1,852 yards, 10 touchdowns and eight interceptions. He went 2-5 in those games, and it was only after Mitch Trubisky was inserted back into the starting lineup that the Bears offense found any kind of rhythm or identity this season.

The Bears signed Foles to a three-year deal this year with $17 million fully guaranteed, per Over the Cap. His contract carries a $14 million dead cap hit next year, so it’s highly unlikely the Bears would outright cut him. But a trade is a definite possibility, and there’s one team in particular who may be interested in acquiring the services of Foles. 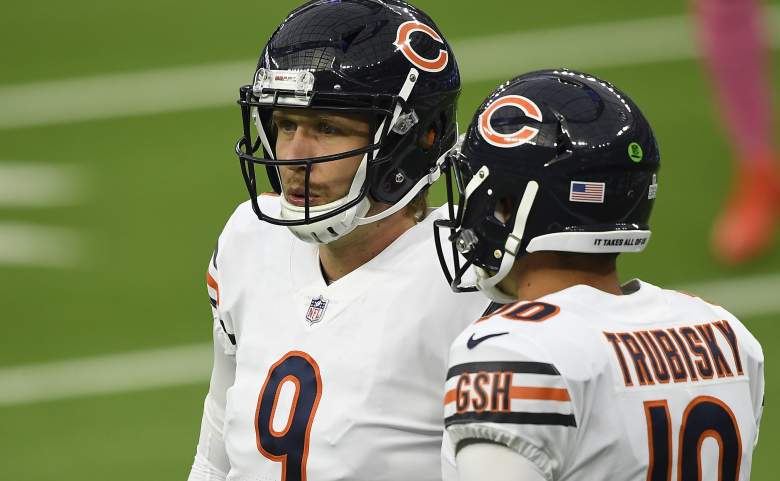 GettyBears quarterbacks Nick Foles and Mitchell Trubisky could both be gone next season. One analyst thinks the Denver Broncos could be a realistic landing spot for either one. (Photo by Kevork Djansezian/Getty Images).

Broncos analyst and insider Benjamin Allbright has been Tweeting about the possible players Vic Fangio and company could bring in to compete with quarterback Drew Lock next season — and Nick Foles’ name keeps coming up. Allbright noted that Denver will likely bring in a veteran, as Lock lacks solid experience, and Foles was the most established name he threw out as a “realistic” option:

It would need to be an immediate day 1 improvement from Lock to justify the expense and/or capital https://t.co/T36QIKrwg6

As we've said on the show for a month, if you're looking at the Broncos QB situation they likely bring Lock back with competition. Probably veteran and not rookie competition.

Broncos head coach — and former Bears defensive coordinator — Fangio has not given up on Lock yet, but he has also expressed frustration with the second-year quarterback’s decision making, particularly in the red zone. Lock has a turnover in 11 consecutive games, so Denver will surely be bringing in competition for him next year.

“Yeah, I mean that’s from day one you talk to him about that,” Fangio said after the Lock had another bad turnover in the Broncos loss to the Chargers, via Sports Illustrated. “You can’t throw red zone interceptions, especially one that there really wasn’t much there or throw it sloppily out there. If you try and hammer one in there and the defense makes a great play that’s one thing, but if you make a bad choice, that’s another thing.”

If it’s turnovers and bad interceptions that churn Fangio’s stomach, he may want to hit the pause button on Foles, who threw an ugly pick in all but one of his starts this year. Trubisky has also been bad when it comes to decision making in the red zone, but if the Broncos would be willing to free the Bears from Foles’ contract, it would surely benefit Chicago. It’s all speculation at this point, but it’s certainly worth keeping an eye on.

Ryan Fitzpatrick with one of the throws of the year! pic.twitter.com/qUjeB1YIIZ

In his nine appearances this season, Fitzpatrick has completed a career-high 68.5 percent of his passes for 2,091 yards, 13 touchdowns and eight interceptions. Not only do Bears fans want Foles gone, fans and a few analysts also want Fitzpatrick to bring his big-bearded talents to Chicago next season.

If the Broncos want to throw a draft pick or two at getting Nick Foles out from Chicago, I'm all for it. https://t.co/WSJRDCoxpQ

If we can get rid of Foles contract sign me up! You don’t even have to trade us anything back in return just take him. https://t.co/HzLpKChS7b

Some want Fitzpatrick to come to the Windy City if Trubisky should sign elsewhere next season — and Allbright has also mentioned Trubisky’s name as an additional possibility for Denver next season.

The options start getting slim.

Trubisky or Foles wouldn't cost as much if available. Minshew?

Draft, but how long a ramp up is that and you currently pick in teens? https://t.co/RzJQulYSuB

I'd sign Ryan Fitzpatrick and pair him with a rookie.#Bears https://t.co/J7pMKVKsjP

If the Chicago Bears signed Ryan Fitzpatrick to a 5 year contract this offseason, I would 100% be okay with that.

When the Bears were 5-1 and I was advocating a Ryan Fitzpatrick trade, I wish that had happened.

Okay just hear me out…

Ryan Fitzpatrick on the Bears 🧐

Regardless of what the Broncos decide to do at quarterback next season, it will be arguably more fascinating to sit back and watch what goes down in Chicago.

READ NEXT: Bears Coach Gets Brutally Honest: ‘He’s Lucky to Be Here’

Loading more stories
wpDiscuz
0
0
Would love your thoughts, please comment.x
()
x
| Reply
This would certainly benefit the Bears -- and there is a chance it could it happen.