Getty Andre Dillard of the Philadelphia Eagles has been the subject of trade rumors for a while now.

Should the Chicago Bears take a chance on a former first-round pick who hasn’t quite worked out with the team that drafted him?

The Philadelphia Eagles selected offensive tackle Andre Dillard with the 22nd overall pick in the first round of the 2019 NFL draft, and he has traveled a rocky road so far in his young career.

After appearing in all 16 games at left tackle as a rookie, a torn bicep forced Dillard to miss the entire 2020 season. He wound up losing the starting LT spot to Jordan Mailata heading into his 2021 campaign, although he did show potential as the season progressed. Jeff McLane of The Philadelphia Inquirer reported that the Eagles had gotten calls from teams interested in trading for Dillard in August of 2021, but nothing materialized.

Alex Ballentine of Bleacher Report thinks snagging Dillard via trade would be an “ideal” scenario for Chicago this offseason. Let’s unpack this idea.

“The Bears will need to make a real investment up front to ensure Fields has the protection he needs,” Ballantine wrote on February 19. “The Eagles don’t necessarily need former first-round pick Andre Dillard. The emergence of Jordan Mailata and the presence of Lane Johnson leave Dillard as the odd man out. The Bears went with Jason Peters at left tackle this year and spent a second-round selection on Teven Jenkins. However, Jenkins only played in six games as a rookie because of a back injury. … They could slot Dillard in as Peters’ replacement and move Jenkins over to the right side.”

Dillard was flirting with “bust” status heading into last season, but he quietly strung together some solid performances in his third year with the Eagles.

“I think he’s just naturally progressed,” Eagles offensive lineman Jason Kelce told Sports Illustrated about Dillard in October 2021. “The technique has gotten better. The knowledge of the game, the awareness. … He’s had a lot of strengths and ability, and now it’s starting to become more natural, and executing on a higher percentage of plays.”

What Would Bears Have to Trade in Exchange for Dillard? 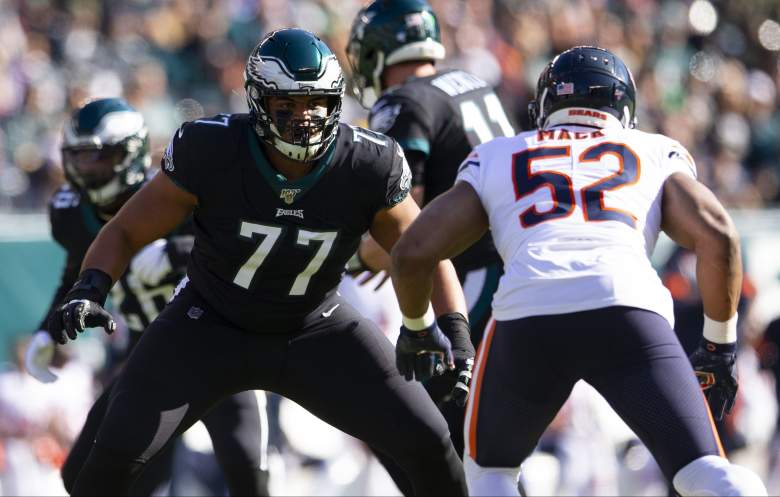 GettyAndre Dillard of the Philadelphia Eagles guards Khalil Mack #52 of the Chicago Bears in the first quarter at Lincoln Financial Field on November 3, 2019.

Chicago doesn’t have a ton of draft capital, but BR has projected a fourth-round pick could sway Philly to move Dillard. The problem with that scenario? The Bears don’t have a pick in the fourth round this year. They do, however, have a fifth-rounder from trading former receiver Anthony Miller to Houston, and if the Eagles would consider that deal, Chicago should give Dillard a try.

The 6-foot-5, 315-pound Dillard “would give the Bears a more experienced tackle who is still only 26 years old,” Ballantine added, and Dillard’s upward trajectory toward season’s end was encouraging.

He earned a 69.6 overall grade from Pro Football Focus last season, surrendering 1.0 sacks, a quarterback hit and 20 pressures in 340 total snaps. That’s not bad, and the Bears need to get some affordable bodies on the line, stat. Dillard, who is due just over $2 million in 2022, per Spotrac, would provide that. While it’s not necessarily an ideal trade scenario for the Bears, if they can get him for a fifth-round pick or less, it would be worth strong consideration.

READ NEXT: Longtime Bears Starter Could Be Released in Surprising Move: Report