Getty QB Nick Foles of the Chicago Bears is hit by Ifeadi Odenigbo of the Minnesota Vikings during the fourth quarter of the game at Soldier Field on November 16, 2020 in Chicago, Illinois. (Photo by Jonathan Daniel/Getty Images)

Well, that was uncalled for. Shortly after the Minnesota Vikings handed the Chicago Bears an embarrassing 19-13 defeat on Monday Night Football, the official Twitter account of the Vikes rubbed a little salt in the wound of injured Bears quarterback Nick Foles.

After taking a hit from Vikings defensive end Ifeadi Odenigbo with just 32 seconds left in the game, Foles appeared to be in a great deal of pain, and he was carted off the field. While we now know his injury doesn’t appear to be serious, the severity of it was unknown last night when Minnesota’s official Twitter account decided to take a shot at the injured Bears quarterback. 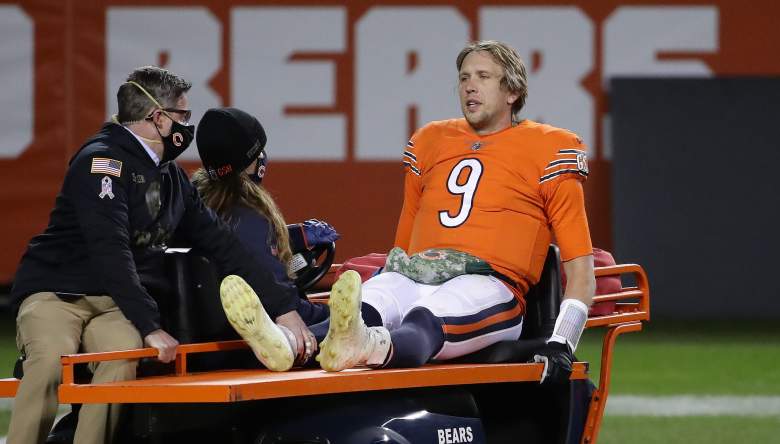 GettyQB Nick Foles of the Chicago Bears is carted off of the field after being hit by Ifeadi Odenigbo of the Minnesota Vikings during the fourth quarter of the game at Soldier Field on November 16, 2020 in Chicago, Illinois. (Photo by Jonathan Daniel/Getty Images)

Perhaps it’s because Minnesota notched its first win over the Bears in the Matt Nagy era, or maybe it was just a lapse in judgment, but the team’s official Twitter account chose to get both literal and figurative about Foles’ injury, Tweeting out an image of Foles lying on the ground with the caption: “Bear, Down” (which is also a reference to lyrics from the Bears’ fight song and a phrase regularly used by Bears fans).

The Bears had won four in a row against the Vikings prior to Monday night’s loss, and Minnesota has now won three straight, so both teams are clearly heading in opposite directions in the NFC North. Still, taking a jab at an injured player — win or lose — is never really a good look, and Bears Twitter let those responsible for the post have it.

As some fans pointed out, Nick Foles, regardless of how well he performs, has always handled himself with the utmost class and dignity. Thus, many rushed to Foles’ defense when they saw what the Vikings’ official Twitter account had to say about his injury.

Wow. I didn't see this until today. Seriously, Vikings? Gloating about injuring your opponent? Also more amazing they haven't deleted it yet. https://t.co/BZrPXjvIkz

As a Bears fan, we suck and y'all 1000% deserved that win. That being said… mocking what looks to be a serious injury is not only classless, but disrespectful. Do better.

Whelp guy, you had a good run running the the Viking twitter account. Good luck with your new job at Arby’s next week.

While a few fans pointed out that the image the Vikings team account Tweeted wasn’t the specific play Foles was injured on, the picture still featured Foles lying on the ground, and the caption didn’t help matters.

Even several fans of the rival Green Bay Packers found the Tweet to be in poor taste:

This is a trash tweet. But let’s just continue glorifying sports injuries as your team’s greatest moments. https://t.co/ENXx8EIZC0

MInnesota does a great job celebrating other players’ injuries. That’s about all they’ve been great at https://t.co/lDjssuzpjh

That’s the photo you use… not the first time Vikings and their fans do shit like this either. Be better.

When you’re a piece of shit organization and want everyone to know it. https://t.co/zRvCu8T9iL

Considering how difficult it is to get fans of the Packers and the Bears to agree on anything, the fact that they seem to be in accordance on this should prompt the Vikings to start looking for a new social media savant, stat.