One team’s loss is another team’s gain this week, as the Green Bay Packers have claimed defensive tackle Anthony Rush off waivers just a day after the Chicago Bears let him go. The Bears waived the 6-foot-5, 350 pound pass rusher Tuesday, and Green Bay claimed him off waivers Wednesday afternoon, per ESPN analyst Field Yates:

The Packers claimed DT Anthony Rush from the Bears.

The Ravens claimed OT Jake Rodgers from the Broncos.

The Jaguars claimed DB Greg Marin from the Titans.

The Bears added Rush a few weeks back to bolster their pass rush and run defense after losing defensive end Roy Robertson-Harris for the season, but he never saw the field for Chicago. Rush began the 2020 season on the Seattle Seahawks’ practice squad before being moved to the team’s 53-man roster for four games. He was waived by Seattle at the end of October, and Chicago claimed him a few weeks after that.

Anthony Rush Stats: What Kind of Player Are the Packers Getting Courtesy of the Bears? 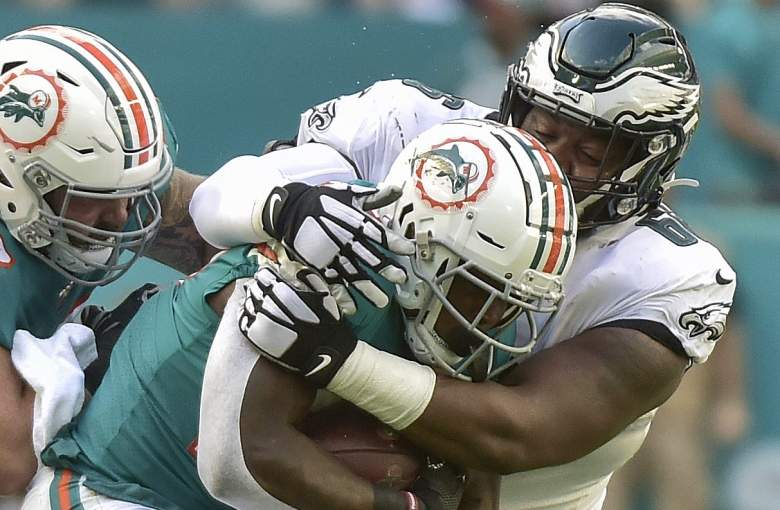 GettyThe Bears added DT Anthony Rush to their active roster on November 10. They waived him November 24, and their biggest rivals scooped him up the next day. (Photo by Eric Espada/Getty Images)

Rush played his college ball at the University of Alabama-Birmingham, where he spent two seasons on the defensive line for the Blazers. He played in 25 games, recording 77 tackles, two sacks, 20 tackles for loss, two forced fumbles and a defensive score.

He was signed by the Philadelphia Eagles as an undrafted free agent in 2019, and he bounced around a bit after the Eagles released him. He caught on with the Las Vegas Raiders very briefly last fall, but he never made the team’s roster.

The Eagles brought him back in October of last season, and he played in nine games, playing on 15 percent of the Eagles’ defensive snaps. He had two passes defensed, nine tackles and three tackles for loss in that time. The Eagles waived Rush in early September, and it didn’t take long for Seattle to bring him in. He played in four games for the Seahawks, recording a half-sack, five tackles and a quarterback hit in limited action.

Rush Joins Packers Just in Time to Face the Bears

The Packers and Bears play each other Week 12, and with Green Bay losing Montravius Adams to a toe injury for the next several games, it’s likely Rush is merely a depth signing and nothing more for Green Bay. With Rush staying in Chicago just a few weeks, it’s unlikely Green Bay will glean much intel from him, either.

The Packers swept the Bears last season, and Bears coach Matt Nagy is 1-3 against the current NFC North leaders. Nagy said this week he thinks the Pack provide the prefect opportunity for his struggling team to re-gain some momentum.

“It’s the Packers,” Nagy said. “It’s against a really good football team that’s well coached and has a lot of great players. That just makes it even more exciting for our guys. So I’m excited to see the competition level of where we’re at and how we’re going to respond to where we’re at right now. ”