Chicago Bears wideout Javon Wims was ejected midway through the third quarter of the Bears Week 8 game against the New Orleans Saints. Wims approached Saints safety Chauncey Gardner-Johnson after a play on offense was over and punched him — twice — in the helmet. Wims was penalized, ejected, and he’ll likely be facing a fine.

What the hell is Javon Wims thinking here with a punch to the head?pic.twitter.com/bEWViPgjQ7

Hitting other players in the helmet seems to be a thing Wims does — he got into fisticuffs in training camp last season, when he hit then-Bears cornerback Prince Amukamara in the helmet during a practice scrimmage.

Jogging my training camp memory… Javon Wims threw punches at Prince Amukamara in training camp last year. I remember Amukamara knew not to throw punches back because he punched a helmet in college and got hurt.

Bears running back Tarik Cohen, who is watching from home due to a torn ACL ending his season, didn’t seem to mind Wims’ actions. Perhaps that’s because Gardner-Johnson was the player who mercilessly ripped the 5-6 back for being short last season.

This dude Wims thought he was outside for a second

Wims could also face suspension, as he was seemingly unprovoked when he hit Gardner-Johnson. The broadcast showed something that may have upset him on the previous play, however.

Wims’ actions were as ridiculous and stupid as they were baffling — he seemingly hit Gardner-Johnson and yanked a chain from his neck for no apparent reason. The telecast showed a replay that doesn’t excuse Wims’ behavior, but it could explain why he did it.

On the previous play, Gardner-Johnson poked his finger through the face mask of Bears’ wideout Anthony Miller. That, combined with his deriding of Cohen last season, could potentially explain Wims’ hostility. Either way, his response was far too drastic, and it cost his team.

So I ask straight up, do you justify Javon Wims' response to Chauncey Gardner-Johnson for poking Anthony Miller underneath the facemask? #Bears #Saints pic.twitter.com/V6569GCBFS

Cohen ‘liked’ the following Tweet that suggested Wims was sticking up for an unnamed teammate:

Stuck up for his boy. I love it.

What, If Anything, Does This Mean for Wims? 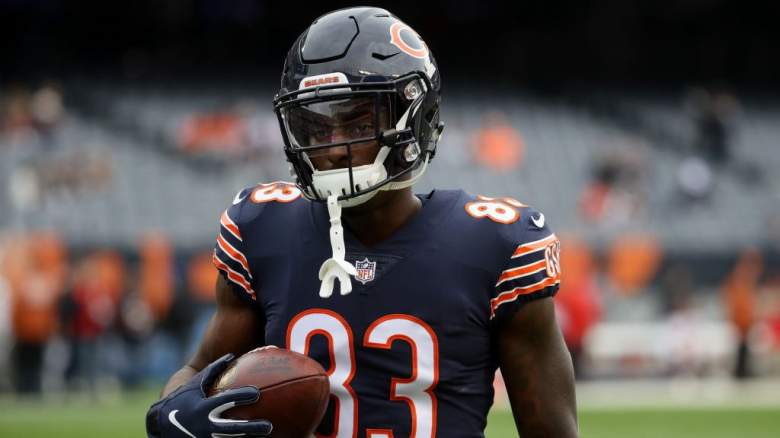 GettyWR Javon Wims of the Chicago Bears was ejected for throwing punches against the Saints. (Photo by Jonathan Daniel/Getty Images)

Wims, a 2018 seventh-round draft pick for the Bears in 2018, has been having a solid third season, considering his role. He has been one of the better blockers on offense, and he has held onto the ball a bit better this year than he did last.

I've always been a fan of wide receivers that can block. Check out #Bears WR Javon Wims and the block he has on CB Corey Ballentine. Wims initiates contact at the 40-yard line and stays with Ballentine for another 10 yards. After Tarik Cohen's 15-yard gain, Wims shows off the 💪🏾. pic.twitter.com/m32KRrHbC4

Wims has four catches for 26 yards and a touchdown so far this season, and he has also contributed on special teams. He’s not an integral part of this offense by any means, but he’s a solid backup. That said, incidents like this one aren’t going to earn him many points from Chicago’s coaching staff. They will, however, provide social media fodder that could follow Wims around for a bit longer than he may like.

READ NEXT: Bears to Bring in Versatile Journeyman OL for Workout

Loading more stories
It was not a good decision for multiple reasons...