Getty Michael Jordan of the Chicago Bulls attempts to drive past Jeff Hornacek of the Utah Jazz during Game 1 of the 1998 NBA Finals.

Come what may with the Zach LaVine-DeMar DeRozan iteration of the Chicago Bulls — or any version of the team thereon  — it’s hard to envision anything topping the 1990s glory days of the Michael Jordan-Scottie Pippen era. In particular, that final championship season in 1997-98 has taken on a mythic air.

Whether it’s due to the struggles the team overcame to win out that year, the fact that it was MJ, Scottie and Phil Jackson’s Chi-Town swan song, the ’98 Finals running ad nauseam on NBA-TV (and ESPN Classic before it) for 20-plus years or The Last Dance docu-series blowing up during the pandemic, basketball people are obsessed with the Bulls’ last title run.

And now they’ve been given an opportunity to own an incredible piece of that history, courtesy of Sotheby’s.

Provided they have a few extra million dollars lying around, that is.

Jordan Jersey Set to Be Auctioned

Sotheby’s just posted a listing for the red Bulls road jersey worn by Jordan during Game 1 of the 1998 NBA Finals against the Utah Jazz in Salt Lake City. It was a contest that was watched by more than 26 million people in the US alone, per Sports Media Watch.

Jordan acquitted himself well in the game, playing a series-high 45 minutes and scoring 33 points to lead his team. In the end, though, it was the Jazz who prevailed in overtime by a score of 88-85 as John Stockton posted a 24-8-2 line.

Of course, Chicago would get the last laugh 11 days later in the same building when Jordan’s jumper over a stumbling Bryon Russell with just under six seconds remaining  punctuated a series-clinching 87-86 win.

MJ’s Game 1 jersey will be auctioned off on September 6, with bidding opening at 10 a.m ET. The sale price is being estimated in the $3-5 million range.

“For a host of reasons, NBA Finals jerseys are incredibly scant from Jordan and as such they are regarded with the highest levels of importance in the collecting community,” the listing copy read. “Jordan Finals jerseys represent the apex of importance in terms of sports relics, a seldom seen but highly desired artifact from the zeniths of Jordan’s career.”

Speaking of attire — in-game or otherwise — former Bulls big man and Jordan teammate John Salley just fired a shot across the bow of young stars who wear wild, flamboyant suits into the NBA Draft greenroom. During a recent interview on VladTV, the 58-year-old said that prospects “need tailors” while adding, “some of y’all outfits are horrible and trash.”

He went on to compare the phenomenon to his situation with the Bulls under Coach Jackson.

“Phil Jackson didn’t like when I was into that because Michael [and] everybody, we were in the suits. You’re holding more than just you. You’re carrying the league and your family and you. Dress like a professional.” 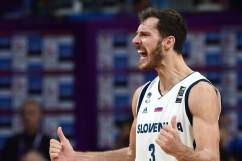 Loading more stories
wpDiscuz
0
0
Would love your thoughts, please comment.x
()
x
| Reply
A piece of Chicago Bulls history is set to be auctioned off this fall and it's expected to fetch a hefty sum.