Baker Mayfield might be trying to “move in silence” in preparation for his third NFL season with the Cleveland Browns, but that doesn’t mean the QB can’t have a little fun on social media.

A hot take from Pittsburgh radio host Adam Crowley started to make the rounds on Twitter Monday, saying that he thinks Mayfield will be riding the pine by midseason, with veteran backup Case Keenum taking his place.

“I think Case Keenum will be starting over Baker Mayfield by Week 8,” Crowley wrote, tagging Mayfield in the tweet.

The tweet garnered over 1,000 likes, one of them being from Mayfield.

Also in the comment section of the tweet was “Freezing Cold Takes,” which will exposes “unprophetic” terrible takes. We’ll have to check back mid-season to see how this one pans out.

The Browns will see the Steelers at Heinz Field for the first time on Oct. 18, and then at home for the final week of the regular season.

Baker Mayfield Thrives When Being Doubted 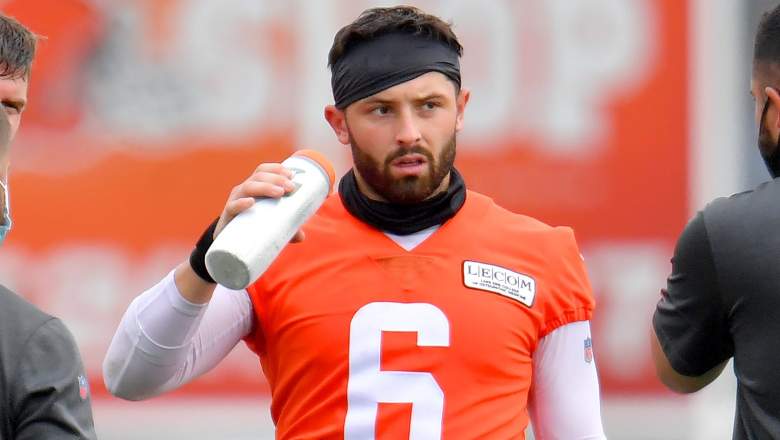 It’s no secret that Mayfield thrives when he’s being doubted. He’s done it every step of his career, eventually leading to him being selected with the top overall pick in the 2018 draft by the Browns.

However, Mayfield is coming off a miserable second season where he passed for 3,827 yards, 22 touchdowns and 21 interceptions, ranking next-to-last in both passer rating (78.8) and completion percentage (59.4%). Mayfield admitted during a training camp press conference that he had a hard time with his lack of success as the Brown stumbled to a 6-10 record.

“Going and having success all through high school and college and having that standard so high and then the past couple years have been a rollercoaster of emotions and not nearly as much success as I am used to,” Mayfield told reporters. “I would say I lost myself not having that success, not finding out what was working. I tried different ways of trying to have that success, and I didn’t find it. I lost myself in that, and I wasn’t able to be who I am for these guys on the team. I have told them that, and I told them that if I am not doing that, hold me accountable. Just finding that and getting back to the basics, establish myself in this new system and attack it.”

The Browns signed Keenum this offseason to a hefty deal to be Mayfield’s backup, inking the former Redskins QB to a contract worth $18 million over three years.

Keenum and Mayfield have already formed a bond, having worked out together multiple times over the offseason. The two have also bounced ideas off one another and traded some tips. Keenum, who is now with his seventh team, has been very impressed.

“He has a stronger arm in person than he does on film, and he made some really good throws on film,” Keenum told reporters. “He is a gamer and can make some big-time plays and some big-time throws.”

Keenum said he expects big things from Mayfield in head coach Kevin Stefanski’s offense, which he called very “quarterback-friendly.” It also helps that Mayfield came to camp in elite shape, which his offensive coordinator Alex Van Pelt complimented him on.

“Physically, he did a hell of a job in the offseason of getting ready,” Van Pelt said on Monday. “A lot of that is leaning down, losing a little bit of weight and leaning down, and that is going to help him as far as his movement skills go. All the work that he has put in the offseason is definitely showing up on the field now in training camp.”

Loading more stories
wpDiscuz
0
0
Would love your thoughts, please comment.x
()
x
| Reply
Baker Mayfield is trying to move in silence in preparation for his third NFL season, but that doesn't mean the QB can't have a little fun on social media.