The Cleveland Browns found themselves in the market for a safety following a season-ending injury Achilles to rookie defender Grant Delpit on Monday and the solution could be a former standout for a division rival.

Former All-Pro safety Earl Thomas is a newly-minted free agent after being let go by the Baltimore Ravens for conduct that adversely affected the team. It was reported that Thomas got in an altercation with teammate Chuck Clark during a weekend practice over a missed assignment.

The 31-year-old Thomas signed a four-year deal with the Ravens last offseason. In his lone season with the Ravens, Thomas started 15 games, made 47 tackles and notched two interceptions and was voted to his seventh Pro Bowl.

“Appreciate the Ravens organization for the opportunity,” Thomas wrote on social media. “Had a great run .. Wish things would have ended different but you live and you learn. Thank you [Ravens GM] Eric DeCosta and everyone else who played a role in bringing him to B-More. Wish you guys the best.”

The Cowboys have long been a rumored home for Thomas, who was a founding member of the “Legion of Boom” defense during the Seattle Seahawks heydays. But there are other teams in the running to land his services. Among them are the Cleveland Browns.

It’s unknown what kind of money Thomas would command on the open market. But regardless, the Browns have the most cap space available, just over $40 million, per Over The Cap. He could also be inclined to sign with the Browns in an effort to stick it to his former squad twice per season in the AFC North.

Delpit went down during practice on Monday and pounded the ground before being carted off the field. It was confirmed later that the injury was as feared — a season-ending torn Achilles.

#Browns rookie S Grant Delpit has suffered a torn Achilles, the MRI confirmed. This ends his promising season before it began.

The Browns moved back in the second-round to select Delpit, who won the Jim Thorpe Award at LSU in 2019, which is given annually to the nation’s top defensive back. Cleveland snagged Delpit with the the No. 44 overall pick, but will have to wait another full year to see him make an impact.

Delpit had dealt with a nagging ankle injury last season at LSU that limited his production. He told reporters after the draft that he could barely walk after game days during the Tigers’ National Championship season, but he still suited up eager to help his team every week. 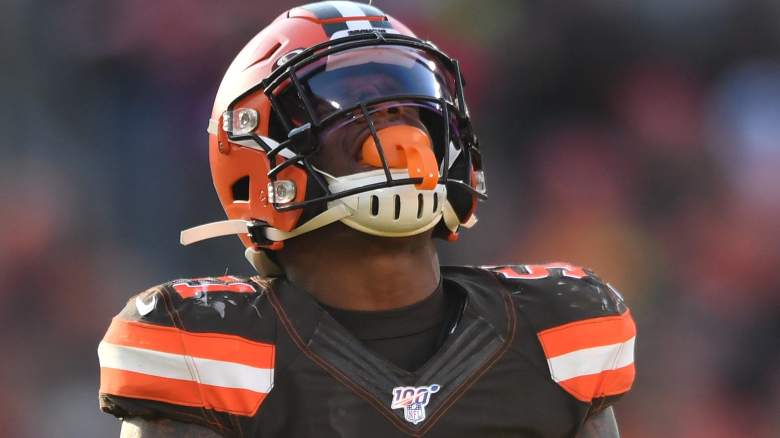 It’s been a tough training camp for the Browns. The team has already lost linebacker Mack Wilson to a serious knee injury and stars Myles Garrett (hamstring) and Nick Chubb (concussion) have missed time. Starting center JC Tretter is also sitting out after having a scope on his knee and cornerback Kevin Johnson is out indefinitely with a lacerated liver the landed him in the hospital.

With Delpit out, it’s expected that former first-round pick Karl Joseph will take over the starting spot full-time, unless a veteran free agent like Thomas comes in and assumes the role.

Joseph signed with the Browns this offseason after beginning his career with the Raiders. He started at least eight games every season while with Oakland, including nine his rookie year. Last season, Joseph had started all nine games before a foot injury ended his season. In 41 career starts, Joseph has 236 total tackles, four interceptions and 15 passes defended. His coverage skills could use work, but Joseph is a solid in the box safety that isn’t scared to make a tackle.

Loading more stories
wpDiscuz
0
0
Would love your thoughts, please comment.x
()
x
| Reply
The Cleveland Browns found themselves in the market for a safety following a season-ending injury Achilles to rookie defender Grant Delpit on Monday.