The Cleveland Browns held their first training camp practice on Friday, but there were two notable absences on the field in veteran center JC Tretter and Pro Bowl defensive end Myles Garrett.

Tretter recently had a scope to clean out one of his knees, NFL Network reported. Browns head coach Kevin Stefanski was vague when it came to when Tretter could return and would not say if he’d be back for the Browns’ season opener against Baltimore on Sept. 13. However, Ian Rapoport said the surgery should only sideline his a few weeks and not impact his availability for the start of the year.

#Browns C JC Tretter recently had a minor knee procedure, a scope aimed at cleaning out loose bodies and easing discomfort, source said. The clean-out should sideline him for just a couple weeks and shouldn’t impact his availability for the season.

Garrett missed practice with a tweaked hamstring, but it’s not anything serious that will keep him out for an extended period of time.

Browns Will Give Nick Harris Reps at Center

Tretter has started every game for the Browns at center the last three seasons, meaning he’s been the only center Baker Mayfield has worked with over his career. Stefanski said that rookie Nick Harris would draw the reps in the absence of Tretter.

“I’m not going to get into the specifics,” Stefanski told reporters on Friday. “We have a plan for him. I’m going to defer to the medical staff. In the interim, it’s good for Nick Harris to get a bunch of reps.”

#Browns Kevin Stefanski won’t say when JC Tretter will be back from his knee procedure but it’s a great opportunity for rookie Nick Harris pic.twitter.com/O2BDtylLr8

Nick Harris started 40 of 50 games while at Washington, stepping into the starting lineup as a true freshman season in 2016. The Browns scooped him up as a fifth-round pick, seeing him as an option both at center as a backup to Tretter and at guard.

“We view Nick as another good young player that we had the opportunity to acquire at that point in the draft. We do view his skillset as a little bit more focused at center, and I think he is a perfect scheme fit for what we want to do with our offense because of his movement skills, athleticism and intelligence,” Browns GM Andrew Berry said after the draft. “Obviously, we love JC. He is our starter. He is a proven player, a proven veteran at the position for a number of years. Nick will learn a lot from him, as well as a number of the veterans that we have in that position group.”

Wyatt Teller to Get First Crack at Starting Guard Spot 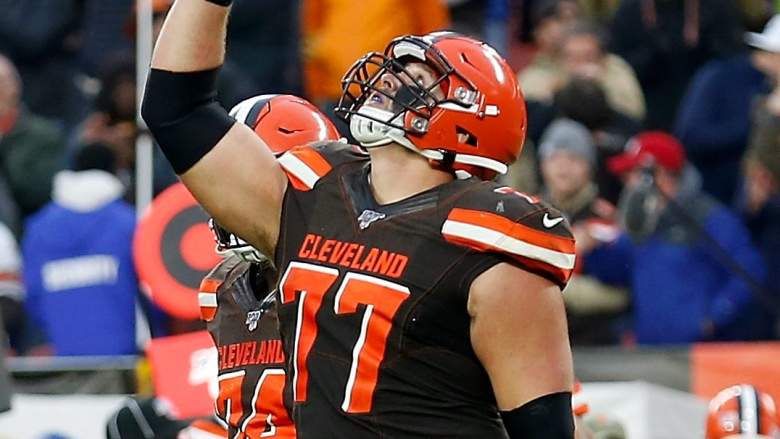 GettyWyatt Teller of the Cleveland Browns.

The right guard spot was going to be a position to watch in training camp, with a heated competition expected to take place for the starting role. With the opt outs of Drew Forbes, Colby Gossett, and Malcolm Pridgeon, Wyatt Teller will get the first crack at the starting gig, as expected.

The depth is limited at guard, but the team brought on undrafted free agent Jovahn Fair on Monday. Fair is a 6-2, 310 pound rookie out of Temple. Originally signed by Kansas City, Fair started 42 of his 45 career games at Temple. He is a native of Akron and attended Firestone High School.

There’s also speculation that the team could sign veteran Ronald Leary, who visited the Browns this week. Leary has played for Dallas and Denver in his career, starting 76 games. However, the Baton Rouge native has played 16 games just once in his career and has been especially hampered by injuries lately. He’s missed 19 games over the last three season with various injuries, including a back injury in 2017 and a torn Achilles in October of 2018.

Loading more stories
wpDiscuz
0
0
Would love your thoughts, please comment.x
()
x
| Reply
The Cleveland Browns held their first training camp practice on Friday, but there were two notable absences on the field.