For a brief moment, Cleveland Browns pass-rusher Myles Garrett was the highest paid defensive player in the NFL.

Garrett’s deal was for five years and $125 million, with $50 million guaranteed at signing and $100 million in overall guarantees — all whopping totals that reset the market on the defensive side of the ball.

Garrett isn’t sweating the fact that he held the title of “highest paid player” for just a few days.

“My parents always told me never worry about someone else’s money. I have mine, and I am filling the role of what I need to on this team,” Garrett told reporters this week. “They know my value, and I know my value. All praise goes to Joey for what he has done and how great and productive he has been at the Chargers, but I just have to play my game and try to do it to the best of my ability.”

Myles Garrett Respects What Joey Bosa Can Do 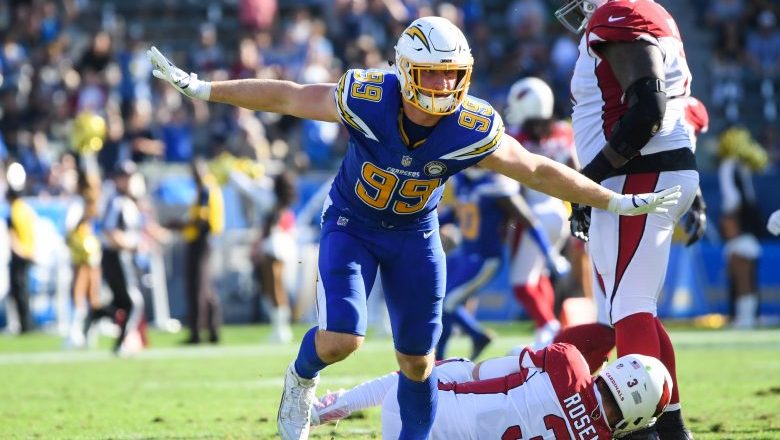 Garrett, the No. 1 overall pick in 2017, is one of the most physically gifted defenders in the NFL. He was a Defensive Player of the Year candidate last year before he struck Pittsburgh Steelers quarterback Mason Rudolph over the head with his own helmet, inciting chaos during the team’s Week 11 matchup. Garrett had 10 sacks before being relegated to the sideline.

After being slowed by injuries in 2018, Bosa showed off his elite talent last season, notching 11.5 sacks and 18 tackles for loss. It was the third time in his four-year career he collected double-digit sacks. Garrett has confidence that he can be the top player at his position in the league, but has massive respect for Bosa’s game as well.

“I know I can be among the very best in the league, and he has the ability, too. That is the competition right there. It does not have to go monetarily at all. I do not pay attention to that. When I see him, I just get fired up because I like the way he plays,” Garrett said. “I think he rushes the passer well. He plays the run. He chases down the ball. I love what he does, him and his brother. I would love to go head to head.

“I will not be actively keeping track of what he is doing, but I am sure I will see it on SportsCenter or whatever channel because he is that kind of player.”

Garrett has been dealing with a lingering hamstring injury to open camp, but he doesn’t anticipate it being anything that will slow him down when the season begins. He has to be healthy and ready to go if wants to help lead the Browns to the postseason for the first time since 2002.