The Cleveland Browns pulled off a trade for safety Ronnie Harrison last week and the former Jacksonville Jaguars starter could not be happier about it.

Cleveland’s depth at safety took a hit during training camp, with rookie safety Grant Delpit going down with a season-ending Achilles rupture. Harrison will compete for a starting job, but even if he doesn’t wrangle that role, he’s happy in his new home, which he expressed on Twitter Sunday.

“So relieved to be out of Jacksonville and around a new team who wants one common goal! Thank you god!”

So Relieved To Be Out Of Jacksonville And Around A New Team Who Wants One Common Goal! Thank You God! ✊🏿💯💯💯

The Browns gave up a fifth-round pick to add Harrison, a solid deal for a defender that has started 22 games in his career. The former Alabama standout also came with sterling reviews from his former Crimson Tide teammate Mack Wilson and Jim Nagy, who’s executive director Senior Bowl and a ESPN draft analyst.

“[The Browns] just traded for an incredibly smart player. Due to his position flex, most assumed Minkah Fitzpatrick was the brains of Alabama secondary in ‘17 but Harrison was the main communicator and teammates said Nick Saban spoke to Harrison on different level than anyone else,” Nagy wrote on Twitter.

Jacksonville is expected to be one of the worst teams in the NFL in the midst of a massive rebuild. Their win total is a league-low 4.5 and they’re +750 just to make the playoffs. The team traded off many of their key pieces, especially on the defensive side of the ball, this offseason. Harrison was the fourth defensive starter to be traded since the season ended, the others being Calais Campbell, A.J. Bouye and Yannick Ngakoue. The Jaguars traded Pro Bowl corner Jalen Ramsey to the Rams last season and released starting running back Leonard Fournette this offseason.

There’s been a lot on my mind and A Lot I Wanna Say, But I’ll let my play do the talking. #DawgPound Y’all Just Got A Killa 💯✊🏿🔥 Lets Get This Ring ‼️

“I think Ronnie’s just going to get better and better,” Marrone told reporters. “He’s an intense player on the field, he plays at a high level of emotion, which I like. He’s in-tune to what’s going on, he practices during the week, he’s available. He has the ability to be an excellent player in this league.” 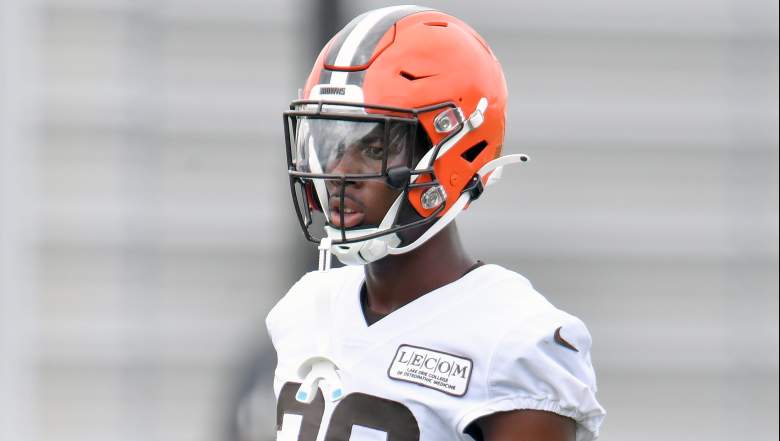 The Browns made some tough cuts on Saturday, among them being undrafted free agent cornerback AJ Green, a player Cleveland really liked.

Green started three seasons for Oklahoma State, getting the nod as a second-team Big 12 defender twice. He had six interceptions and 147 total tackles over his career with Oklahoma State. However, Green did not have an impressive combine performance. He ran 4.62 in the 40-yard dash and later ran a 4.71 on his second run through.

Rookie CB AJ Green expected to be signed to Browns practice squad, per source. I’m told, however, that DT Daniel Ekuale will be moving on

Luckily, he’ll have some time to work on his craft with the Browns. The team announced they were resigning him to the practice squad on Sunday.

Loading more stories
wpDiscuz
0
0
Would love your thoughts, please comment.x
()
x
| Reply
The Cleveland Browns pulled off a trade for safety Ronnie Harrison last week and the former Jacksonville Jaguars starter could not be happier about it.