Baker Mayfield suffered a rib injury during the Cleveland Browns 32-23 victory on Sunday against the Indianapolis Colts but left no question that he’d play through it.

When asked if he’d be able to play through the injury following the game, Mayfield responded: “Oh, yeah. Mama didn’t raise no wuss.”

Asked if he thought he could play through his rib injury Sunday at Pittsburgh, Browns’ QB Baker Mayfield responded: “Oh, yeah. Mama didn’t raise no wuss.”

The former No. 1 overall pick has never missed a start due to injury in his career.

Mayfield’s X-rays came back negative, which was a good sign, but his brand of play was a sore subject. Mayfield was 21-of-37 for 247 yards and a pair of touchdowns. However, he also threw two interceptions.

“I said it after the game on the field, I think that was the worst game I have played out of the five so far. I have to get better,” Mayfield said. “A lot to learn from, but we learned on that defense and we got the yards when we needed it. The good thing about it is we do not have to learn from a loss – we can get better after a win. Just the mindset of trying to be just a bunch of big hairy American winning machines is important.”

Mayfield’s 37 attempts were his second-highest total this season, having thrown 39 times in the Browns’ opener against the Ravens that they trailed from behind basically the entire game. But Mayfield and his receivers looked much more in-sync this time around, which was much needed with the run game struggling to find traction against the Colts tough defensive front.

After rushing for 300-plus yards last week as a team, the ground game produced 124 yards rushing, not crossing the 100-yard mark until D’Ernest Johnson busted free for a 28-yard run to seal the game late.

Rashard Higgins Steps Up in Return to Field 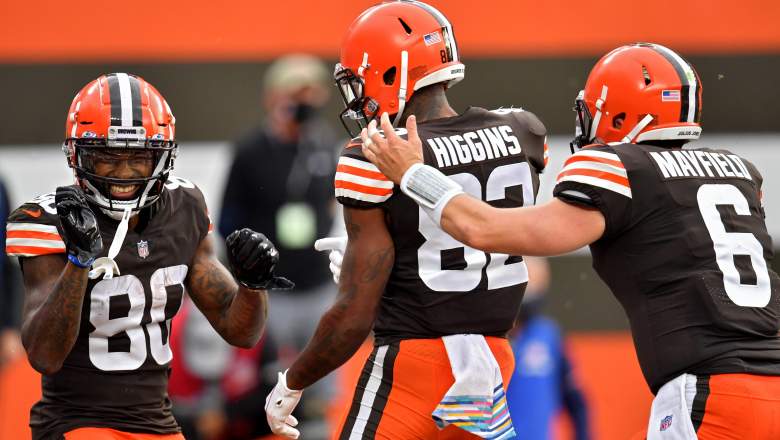 The Browns rolled out the red carpet for Rashard “Hollywood” Higgins, who returned to the field after three weeks of being inactive. Higgins made three catches and hauled in his first touchdown of the season.

“Proud of him being able to deal with everything and come in and make plays when he can,” Mayfield said. “I think it was a little bit of miscommunication on their end in the secondary. It looked it was supposed to be Cover 2 and just kind of threw him open. That is just playing ball. That is knowing that guy. I have had a lot of reps with him and knowing where he is going to be.”

For Higgins, the touchdown felt familiar as one of the longest-tenured Browns on the roster.

#Browns WR Rashard Higgins on scoring TD: "Felt like I've been there before. It was just like, 'I miss you, you miss me, let's walk together'. You guys know, I've been here through the 0-16…just to see everything turn around, it's amazing. Night and day."

“Felt like I’ve been there before. It was just like, ‘I miss you, you miss me, let’s walk together’. You guys know, I’ve been here through the 0-16,” Higgins told reporters on Monday. “Just to see everything turn around, it’s amazing. Night and day.”

Loading more stories
Browns quarterback Baker Mayfield left no question about his status for next week.