The Cleveland Browns sent Baker Mayfield to the bench during a blowout against the Pittsburgh Steelers, and the hot takes were aplenty after the loss.

Former Pro Bowl safety Donte Whitner — who played for the Browns in 2014 and ‘15 — was one of the people to call out Mayfield after the loss, questioning the former No. 1 overall pick’s work ethic.

“Baker Mayfield can’t read defenses,” Whitner wrote on Twitter. “Below [average] QB at this point. … I wonder if he puts in the same amount of work as Brady and Brees away from the practice facility? Prob not.”

Baker Mayfield can’t read defenses… below AVG QB at this point… I wonder if he puts in the same amount of work as Brady and Brees away from the practice facility? Prob not.

Mayfield has a miserable day in the 38-7 loss, looking unsure under constant pressure. He finished the contest 10-of-18 for just 119 yards and two interceptions — one of those going for a touchdown. 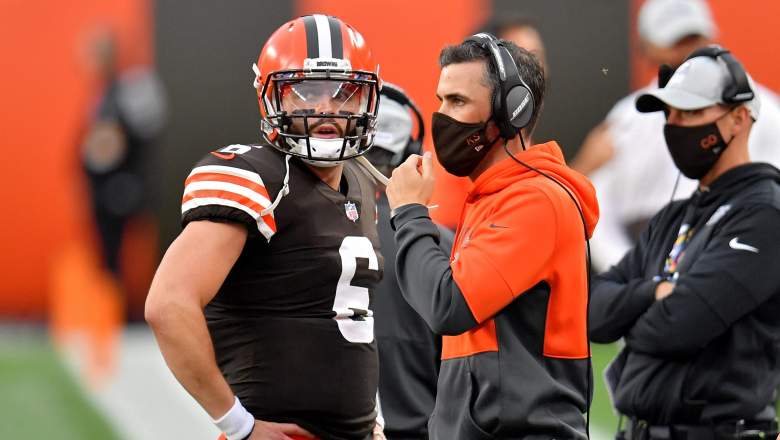 Browns head coach Kevin Stefanski didn’t leave any wiggle room when it comes to the starter at quarterback. It’s Mayfield, as long as he’s healthy enough to play.

“Baker will start as long as he’s healthy, and I think he will be,” Stefanski told reporters. “I didn’t want to see him get hit one more time. I put that on myself. Went into this game knowing we have to keep him clean and we didn’t do a good enough job.”

Kevin Stefanski: Baker Mayfield will be the starter next week as long as he's healthy #WEWS

Mayfield didn’t shy away from taking responsibility after the lopsided loss.

“Obviously not good enough,” Mayfield said of his performance. “Got to take care of the ball. Not good enough.”

Mayfield did earn the respect from the Steelers defense, who had said they wanted to “inflict good punishment” on him prior to the matchup.

“Baker is a good quarterback. … we don’t really think about hurting a player. We hit him a couple times, we knew his ribs were hurting, but we don’t intentionally go in and try to hurt somebody.”

Bud Dupree on getting after Mayfield: "Baker is a good quarterback. … we don't really think about hurting a player. We hit him a couple times, we knew his ribs were hurting, but we don't intentionally go in and try to hurt somebody."

It was Steelers DT Cam Heyward who was quoted saying the “good punishment” line and took issue with how it was handled by reporters, specifically Mary Kay Cabot of cleveland.com. He responded to one of her tweets after the game, writing: “Never said that. Period. I said I wanted to inflict good punish as in punish the Qb as any d lineman would. Also I said I wanted to make him think about the rush. I respect every player and I never want to be known as dirty player. I respect reporting please respect my words”

#Browns Baker Mayfield takes a hard shot from Cam Heyward, who wanted to make him think about his injury. Mayfield winces on the bench

As much as some have clamored for Mayfield to be benched, Keenum didn’t do much better when inserted into the game. He completed 5-of-10 passes for 119 yards.

The Browns signed Keenum this offseason to a three-year, $18 million deal this offseason, reuniting him Stefanski, who was an offensive assistant in Minnesota while Keenum was there. However, Keenum has spoken on his role as the backup in Cleveland.

“Coming in, obviously my role, one is to be ready to play,’’ he said. “I know the situation with Baker, how he’s played, and the investment the team has in him. I’m excited to help bring that room together, help bring an offense together and be the best team player I can be.”