The Cleveland Browns will be missing cornerback Greedy Williams on Sunday against the Indianapolis Colts as he continues to recover from a shoulder injury he suffered in training camp.

Williams was slated to be the starter coming into the season but will now miss his fifth game to start the year. The Browns selected Williams in the second round of last year’s draft. He was considered to be a first-round talent, but the LSU product dropped due to concerns about tackling. He’s mostly dispelled that criticism early on his NFL career and proved to be a key piece of the defense playing opposite of Denzel Ward.

Some Browns fans have become frustrated that Williams continues to be out despite returning to practice nearly three weeks ago. Williams has heard the noise, but he’s not dwelling on it.

“We don’t listen to those kinds of people I know what I’m dealing with,” Williams wrote on Twitter Friday after being listed at out for Week 5.

We don’t listen to those kinds of people I know what I’m dealing with https://t.co/V2w26HnsCX

There’s a chance Williams could end up on injured reserve, meaning he’d miss a minimum of three more weeks. However, head coach Kevin Stefanski is hopeful of “good news” coming down the pipe.

“We’re hopeful we’ll have some good news in the next couple of weeks,” Stefanski said on Friday.

Terrance Mitchell has stepped up with Williams out, leading the Browns with 12 tackles (11 solo) in last week’s 49-38 win against the Cowboys. That was in large part because Dak Prescott threw the ball a whopping 58 times.

There’s a chance Williams will have to win back his starting role when he does return from the injury due to Mitchell’s strong play.

Browns, Colts Both Have Key Injuries for Week 5 Matchup 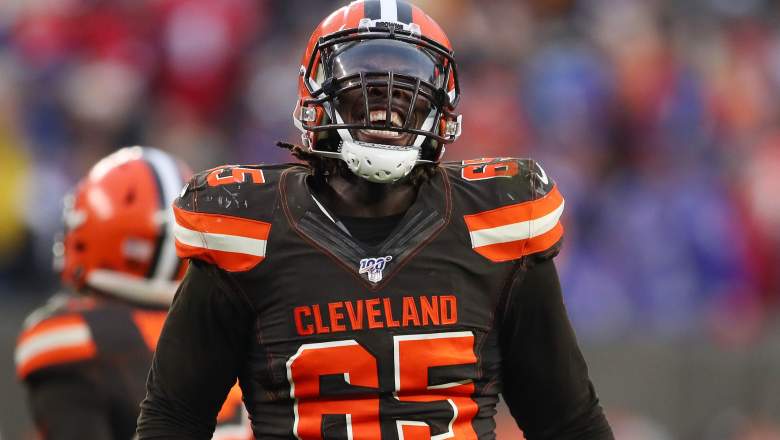 GettyLarry Ogunjobi of the Cleveland Browns.

The Browns will also be shorthanded in the trenches when they face the Indianapolis Colts on Sunday, with defensive tackle Larry Ogunjonbi being ruled out with an abdominal injury.

Ogunjoboi has been a key piece of the Browns defensive line, which might not be indicated simply by his stats — 10 tackles, three run-stuffs and one forced fumble. He led all defensive players in Pro Football Focus’ ratings in Week 1 and has played big in a contract year. Ogunjobi missed practice all week.

“He’s tough, I know he’s going through a lot with his oblique, I definitely don’t like seeing him out, we’ll miss him,” Browns defensive end Myles Garrett said on Friday. “But we have guys who will fill the role as best as they can.”

#Browns DE Myles Garrett on DT Larry Ogunjobi: He's tough, I know he's going through a lot with his oblique, I definitely don't like seeing him out, we'll miss him, but we have guys who will fill the role as best as they can

Safety Karl Joseph is questionable for the matchup, as is defensive end Adrian Clayborn.

The Colts have also been hit hard by injuries this week, with both left tackle Anthony Castonzo and linebacker Darius Leonard being out for the matchup.

Loading more stories
wpDiscuz
0
0
Would love your thoughts, please comment.x
()
x
| Reply
The Cleveland Browns will be missing cornerback Greedy Williams on Sunday against the Indianapolis Colts as he continues to recover from a shoulder injury.