The Cleveland Browns beat the Dallas Cowboys 49-38 on Sunday in dominant fashion, but it didn’t come without a key casualty, with running back Nick Chubb going down with a knee injury.

Chubb missed the majority of the game against Dallas after getting rolled up on at the end of a play. The third-year back is expected to miss “several weeks” with an MCL injury, with six weeks being the general assumption. However, Browns head coach Kevin Stefanski hinted that Chubb — who is known for his relentless work ethic — could be back sooner.

“What that ends up being, I don’t know,” Stefanski told reporters Monday. “I know Nick Chubb, and I wouldn’t put a time frame on it yet. … Knowing Nick, he’s gonna work very hard in rehab. I know that’s hard to see your teammate go down like that; but knowing Nick, he will work his butt off to get back.”

#Browns RB Nick Chubb suffered an MCL sprain in his knee during yesterday’s win, coach Kevin Stefanski said, but the injury is not season-ending.

Chubb was placed on injured reserve, meaning he’ll miss a minimum of three weeks. The fear was that Chubb would miss the rest of the year, cutting short what was looking like another Pro Bowl season. Chubb had already racked up 335 rushing yards and four touchdowns and posted two 100-yard games. His explosive playmaking will also be missed, with Chubb recording the most 20-yard rushes of any player since 2018.

“You never like to see your players on the ground like that. And again, Nick does not say much as you guys know, but he is a leader of this football team. His teammates really respond to him and the way he goes about his business. He is disappointed, but I can promise you he is going to attack this rehab.” 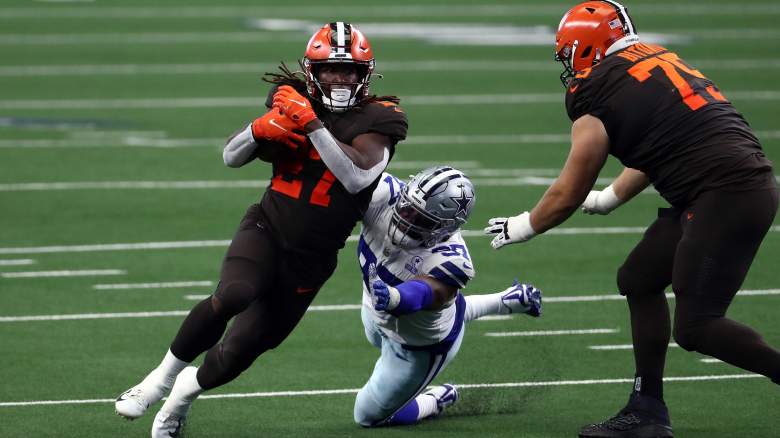 The Browns luckily have another Pro Bowl waiting in the wings in Kareem Hunt. However, Hunt has been dealing with his own injury issues. He was questionable heading into the Week 4 matchup, but still managed 71 yards on 11 carries and scored a pair of touchdowns.

As a team Cleveland rushed for 307 yards — the most the Cowboys have ever allowed. D’Ernest Johnson led the team with 95 yards and Dontrell Hilliard chipped in 19. Chubb had 43 before exiting and wide receiver Odell Beckahm Jr. had 73 yard — 50 of those coming on a dagger, highlight reel reverse.

“That was good to see with those guys stepping up, the offensive line and the tight ends and the wide receivers they are all straining, and the runners were running through arm tackles and breaking tackles so that that was good to see,” Stefanski said. “But you lose a player of Nick’s caliber, we are going to need those guys to step up really across the entire offense.”

Before Beckham’s run, he got a tip from rookie tight end Harrison Bryant, who told the seven-year vet to stay inbounds.

“It’s funny, Kareem (Hunt) before the play was like, `We just need 5 yards,” Beckham said after the game. “And Harrison Bryant, the rookie is giving me advice and coaching me up and telling me to stay inbounds. I said, `Thanks, rook.’ And I turned the corner and everybody was blocking and I just turned the jets on and found the end zone.”

The Browns will look to keep rolling next week as they host Philip Rivers and the Indianapolis Colts (3-1).

READ NEXT: Speculation Over All-Star Guard Joining Lakers Heats Up