Baker Mayfield is not at 100 percent, which the Pittsburgh Steelers are well aware of. So when the Cleveland Browns head to Heinz Field on Sunday, expect the Steelers to be hitting Mayfield early and often.

“I’m not a doctor,” Steelers defensive tackle Cam Heyward said this week on a video call with Steelers reporters. “I’m not going to sit here and tell you that I know how bruised up he is. But at the end of the day, I’m just trying to inflict good punishment.”

#Steelers DE Cam Heyward says he’s not actively thinking about where exactly Baker Mayfield may be hurting: “I’m just trying to inflict good punishment… He’s going to be a warrior for his team… It’s up to us to make him think about that injury at the end of the day.”

While he’s listed as questionable Mayfield has been adamant that he’s going to play despite a chest injury.

“With any injury, there’s always flexibility and movement and then there’s a pain element to all of this, but he’s progressing,” Browns head coach Kevin Stefanski said.

As much as the sides might want to play it down, this edition of the matchup between the two AFC North rivals will be extra spicy. The game will be the first for Myles Garrett against the Steelers since he bashed Pittsburgh backup QB in the head with a helmet.

“They’re a 4-1 team,” Steelers coach Mike Tomlin told reporters earlier this week. “We’re trying to remain undefeated. We’re not looking for that low-hanging fruit or that reality TV storyline and so forth. This is a big game here in 2020.”

Garrett had a similar sentiment and said it hasn’t been on his mind to have a face-to-face conversation with Rudolph before or after the game.

“I haven’t thought about it,” Garrett said of speaking with Rudolph privately to reporters on Friday over video conference via Cleveland.com. “Focusing on how I’m going to get to Ben. I’ll cross that bridge when I come to it, whether that’s down the road or whenever we see each other. I’m just focused on the game plan and getting the win. That comes secondary.”

Rudolph is now the Steelers backup, so Garrett will be hunting veteran passer Ben Roethlisberger instead.

“I’m just ready to play within the six seconds that the average play lasts,” Garrett said. “After that, that’s on them. I’ll walk away from any situation that we have and [when] they snap the ball again, I’ll be there.”

Browns Will be Shorthanded Defensivley in Pittsburgh 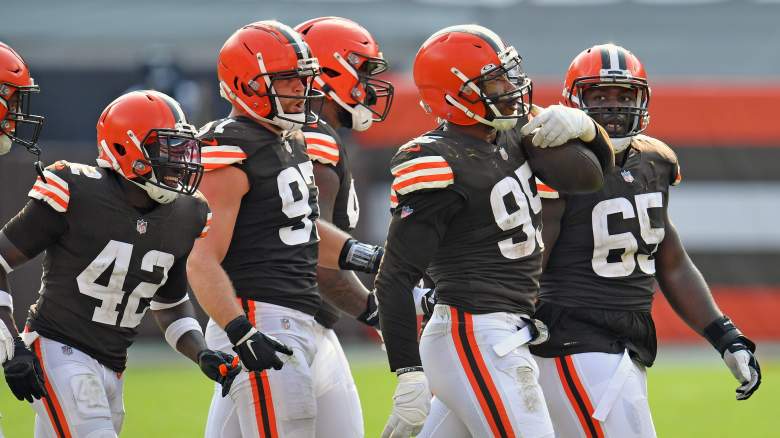 While Mayfield will be on the field, the defensive side of the ball will be missing some notable names for the Browns. Safeties Karl Joseph (hamstring) and Ronnie Harrison (concussion) are both out, as will rookie linebacker Jacob Phillips (knee). On offense, the Browns will look to keep rolling without starting guard Wyatt Teller.

The Browns are 4.5-point underdogs, per Odds Shark, in a game that could have major implications for the division and postseason.

“This will be a defining game,” Garrett said. “How the rest of the season plays out will probably rest on this game because of how important it plays for who will be up in the division and who will fall.”

Loading more stories
Browns quarterback Baker Mayfield is not at 100 percent, which the Pittsburgh Steelers are well aware of.