Dallas Cowboys tight end Blake Jarwin should be counting his lucky stars after avoiding a collision that likely would have left him seeing stars. Or worse.


The play in question occurred during Tuesday’s training camp practice when quarterback Dak Prescott threaded the needle down the seam to Jarwin, who made a nifty grab but narrowly avoided getting sandwiched by Woods and cornerback Daryl Worley, both pulling up at the final second. 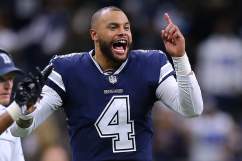 Dak Prescott continues to show some favoritism for his tight ends in these practices. Obviously, the receivers are getting plenty of targets, but Prescott certainly seems to enjoy looking down the seams for the likes of Blake Jarwin, Dalton Schultz and Cole Hikutini. Prescott had a beautiful completion to Jarwin between the two safeties – though, in a live setting, Xavier Woods very likely would’ve laid a big hit on Jarwin.

Prescott’s critics like to point to accuracy as his biggest deficiency, but there’s nothing off about this dime. This is a perfectly-placed pass into an air-tight window. Not the issue. The issue, for nitpicking purposes, is Prescott’s decision-making; Woods is right about Jarwin potentially ending up injured if this were a regular-season game.

The term “hospital pass” applies even to a completion, and Jarwin’s defensive mates, on instinct alone, were fitting him for a football toe tag.

Devastating hits are why the sport is so exorbitantly addictive, to watch or play. Everyone involved knows the stakes. Prescott probably delivers the same ball and Jarwin the same effort had this occurred a few Sundays from now. Their coaches would want the same. But it’s a gentle reminder of what could have been under a different yet inevitable circumstance — perhaps enough to think twice next time.

“I just can control what I can control,” Woods said, per ESPN’s Todd Archer. “That’s the bottomline. I know my worth. I know that I can play and that’s all that matters to me. It doesn’t bother me anymore, man. I don’t even pay no mind to it.”

Interestingly, Woods shares an agent (David Mulugheta of Athletes First) with Thomas, and the former reportedly is “looking to cash in” after the 2020 campaign. He hired the right help as Mulugheta, who represents many of the NFL’s top safeties, including Arizona’s Budda Baker, who on Tuesday landed a four-year, $59 million extension. Baker is now the highest-paid safety in league history.

Three out of the top five safety deals currently in the NFL were negotiated by the same agent: @DavidMulugheta.

He’s also got a few other guys coming up soon [including Jalen Ramsey and Deshaun Watson].

Woods, a 2017 sixth-round pick, is entrenched as a Week 1 starter opposite newcomer Ha Ha Clinton-Dix. Veteran Darian Thompson and sophomore Donovan Wilson are expected to rotate with Clinton-Dix, who reportedly hasn’t impressed in camp.

Loading more stories
wpDiscuz
0
0
Would love your thoughts, please comment.x
()
x
| Reply
Jarwin should be counting his lucky stars after avoiding a collision that likely would have left him seeing stars. Or worse.