Getty Ky Bowman celebrates with Eric Paschall during a 2020 game between the Golden State Warriors and the New Orleans Pelicans.

Seventeen months after undergoing surgery to repair a torn ACL, former Golden State Warriors point-man Ky Bowman is still looking to regain solid footing as a pro baller. After a ho-hum return in the G League last season, the 25-year-old will be continuing that effort on a new continent in 2022-23.

Per an announcement from the club last week, Bowman has put pen to paper on a contract with New Basket Brindisi of LBA Serie A in Italy.

Bowman appeared in 45 games (including 12 starts) for the Dubs as an undrafted rookie during the team’s injury-plagued 2019-20 campaign. In doing so, the Boston College product averaged a respectable 7.4 points, 2.9 assists, 2.7 rebounds and 1.0 steals per contest. His shooting splits checked in at 42-31-83.

More recently, the former Warrior could be seen balling out with the Dream Team at the SF Bay Area Pro-Am.

Another Bite at the Apple

When Bowman’s knee injury occurred, he was already scrapping to get back into the Association, having taken a spot with the G League’s Agua Caliente Clippers. Needless to say, missing a year of action didn’t do him any favors in that endeavor.

Shortly after Bowman was deemed physically capable of performing, the Austin Spurs decided to take a flier on him, acquiring his rights from Agua Caliente in exchange for returning rights to Cam Reynolds and a first-round pick in the 2022 G League Draft. Alas, the 6-foot-1 guard showed major signs of rust in his comeback bid.

Over 12 appearances with Austin, Bowman averaged 4.8 points and 3.4 assists per game while shooting just 36.1% from the floor.

He clearly did enough, though, to convince the San Antonio Spurs to give him another look during summer league last month, and he took advantage of that opportunity. In three games in Las Vegas, Bowman averaged 8.3 points in 17.6 minutes per outing and shot 47.4% from the floor and 55.6% from three-point range.

Bowman’s Trainer Thinks the NBA Is in His Future

While he was grinding to get back to the big time following his surgery, Bowman worked out with Packie Turner — who had previously trained the likes of Steph and Seth Curry, as well as multiple Dubs alums. And, for his part, Turner believes that Bowman will one day return to the best league in the world.

“Ky is no stranger to adversity, but he also never backs down from it. He keeps showing up and putting one foot in front of the other,” Turner wrote via Instagram in February. “Ky will be back in the league very soon, I have zero doubt in my mind. Proud of the laser focus and diligence he has had with his recovery in training this past year.” 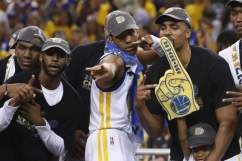 Loading more stories
wpDiscuz
0
0
Would love your thoughts, please comment.x
()
x
| Reply
Former Golden State Warriors guard Ky Bowman has recovered from his ACL tear and is looking to reestablish himself as a pro baller.