The NBA All-Star Game is pretty much the antithesis of competitive basketball, so there’s usually not much to be extrapolated from it. However, the union of Golden State Warriors star Stephen Curry and the LA Lakers’ LeBron James in this year’s game nonetheless provided fertile ground for daydreaming about a legitimate team-up.

Especially after the longtime rivals combined to score 74 points in leading Team LeBron to a 163-160 win over Team Durant in the February showcase.

Fans aren’t the only ones who have imagined what the superstar pairing could be like, though. On a recent episode of his show, The Shop: Uninterrupted, James namechecked Steph’s Dubs as a team he could join and make an immediate impact with, adding: “We could be very special.”

According to one longtime pundit and radio host, this and other comments from LeBron are more than just idle chatter — the GOAT candidate legitimately has a desire to make a Bay Area move.

Cowherd: LeBron Trying to Will His Way to San Fran

Is LeBron campaigning a move to the Warriors?

"I absolutely believe he's trying to speak something into existence, that's Golden State… To me, it feels obvious." — @ColinCowherd pic.twitter.com/f7fRNyaYyg

The hoops blogosphere has been abuzz with reports that the Lakers don’t have a commitment from James beyond next season (after which his current deal is set to expire). In response to the uncertainty, Fox Sports‘ Colin Cowherd opined that the baller is laying the groundwork for an eventual move with his comments on The Shop and in other arenas.

“I absolutely believe that LeBron is trying to speak something into existence and that’s Golden State,” Cowherd declared. “He wouldn’t leave California, that’s where all his businesses are… He can just move his stuff up the road.”

Per Cowherd, LeBron has seen the writing on the wall in LA, and everything he’s saying now has been swirling around in his head for some time.

“To me, it feels obvious,” Cowherd said. “He’s not just suddenly interested in Steph. He sees the dysfunction. He sees the roster. He sees the [Russell] Westbrook salary-cap issue. He sees Anthony Davis’ health. He’s gonna throw it out there, again and again and again, how much he’d like to play with Steph and the Warriors.”

What the Dubs Have That the Lake Show Doesn’t

Golden State’s dual-timeline approach to roster-building has definitely had its share of critics, the argument being that by attempting to serve two masters, the team runs the risk of falling short on both sides in the long run. But the fact that the Warriors are one win away from the chip definitely feels like proof of concept.

And, according to Cowherd, the club’s unique mix is likely the driving force behind LeBron’s perceived desire to join the fray.

“LeBron was watching [Game 5] – forget the fact the Warriors have Steph, Klay, Wiggins, Draymond, and now-emerging Jordan Poole, they also have something he’ll never get the rest of his career if he stays in Los Angeles… Three stars that are 19,20 years old. James Wiseman, Moses Moody, and Jonathan Kuminga,” Cowherd said. 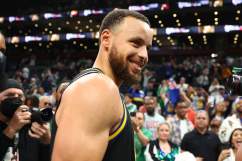 Loading more stories
wpDiscuz
1
0
Would love your thoughts, please comment.x
()
x
| Reply
According to Fox Sports' Colin Cowhered, LeBron James is trying to talk his way out of the purple and gold and into a Golden State Warriors uniform.