After the Golden State Warriors hoisted the Larry O’Brien Trophy and officially reclaimed their former status as the class of the Association, the 2022 NBA Draft was something of an afterthought for a subset of fans. It didn’t help that the Warriors went from having two lottery picks last summer to selecting 28th, either.

Upon the team’s selection of Milwaukee wing Patrick Baldwin Jr, though, it’s probably safe to say that Dub Nation’s draft juices were flowing once again. A handful of draft aficionados believe that the Warriors may have struck gold, too.

The 19-year-old Baldwin was limited to just 11 games during his lone campaign with the Panthers due to injuries, and his numbers suffered as a result. However, his size/length at 6-foot-9 with a 7-foot-2 wingspan and his silky shooting stroke — which is already being likened to Stephen Curry’s — are eyebrow-raising.

His jumper isn’t the only thing giving off Steph vibes, either.

In the immediate aftermath of his selection by the Warriors, Twitter sleughts jumped all over a January tweet from Baldwin, who wasn’t just dealing with injuries at the time but also mounting losses by Milwaukee.

Tweeted Baldwin: “I love everyone in this locker room. We are going to figure this out.”

For longtime Warriors fans, his declaration may have a tinge of familiarity. That’s because the wording and sentiment are eerily similar to a Twitter decree made by Curry during his earliest days with the Dubs, way back in November of 2009.

At the time, Golden State was fresh off a big loss to a mediocre Pacers team and in the midst of a 2-5 start. Meanwhile, Curry had yet to truly find his footing as a fledgling pro. In spite of the adversity they were facing, though, the sharpshooter put on his brave face and posted the following:

Thirteen years later, it’s safe to say that he made good on his promise. And while Baldwin’s team never did bounce back, he’ll have a chance to make good on his own massive potential in the Bay.

Whether the similarity between the two tweets means something was fated in the stars, or it’s little more than a funny coincidence, fans have some big thoughts on the situation.

“Wow this is real? That’s a crazy similarity haha. Let’s hope this dude is a diamond in the rough,” another Reddit comment read.

“He didn’t figure it out there, but fortunately for him we have it figured out here already so…mission accomplished?” another commenter added. 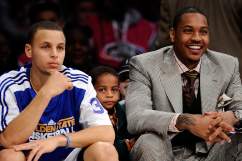 He gon have to jump higher than 26 inches though. That’s why he fell in the draft