Tensions are beginning to boil over in Chiefs Kingdom as the franchise has dropped below a .500 record for the third time in five weeks.

Fans are upset that this Super Bowl-caliber roster isn’t performing up to snuff and they haven’t been shy about telling the players how they feel. This is common in professional sports, but less common are athletes that willingly respond to the noise time and time again.

No one does that better than safety Tyrann Mathieu and he was at it again on Instagram on October 29 — coming to the defense of teammate Anthony Hitchens.

“All we did was go to 3 AFC champions games and 2 Super Bowls and 1 SB win .. in my first 3 years here so far !! y’all fans will never be satisfied it’s sad !!” Hitchens responded.

To be fair, the post asked fans to rank three moves in order of how “bad” they were, in effect calling the linebacker out. Included in this insult were Frank Clark, Clyde Edwards-Helaire and GM Brett Veach.

Hitchens’ response didn’t go too far, calling it “sad” that fans aren’t satisfied with the results of the past few seasons. Mathieu took things one step further, however. 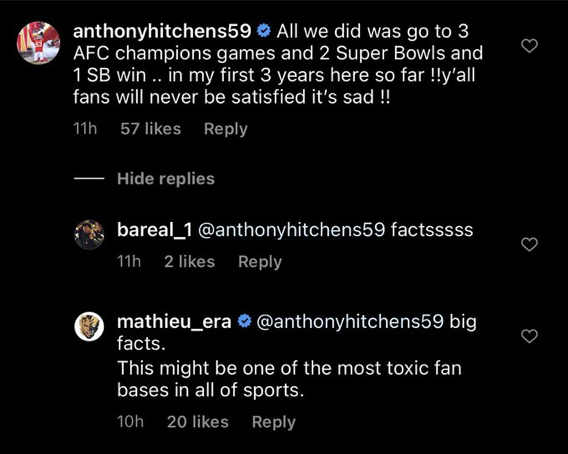 “This might be one of the most toxic fan bases in all of sports,” voiced the playmaker, before getting into several arguments with fans.

“I don’t care how you feel. You can’t beat me at anything life has to offer,” Mathieu said to one user named @whiskeytullos. Then to @derek_heaters: “that’s your problem, you listen to haters. Y’all people are trash.”

And another two to @eckoromeo: “you should have been a football player then,” adding, “as an athlete you go through periods of slumps or not executing how you want. That’s a part of sports… you know how many games we have won? How many times we have done more than good. Shut up.”

Hitchens didn’t interact with any users directly, but he did have one more comment for the masses. He stated: “These boys will never understand talk big on internet but want pics and autographs in person haha .. me my family and kids family “that don’t exist yet” are set for life !!! Y’all keep trolling put y’all phones down and go get some money, BTW y’all opinions don’t matter!!”

Mathieu & Hitchens Could Be on the Way Out

If the Chiefs were on their way towards a third straight Super Bowl appearance, the argument could have been made for Mathieu to receive an extension. With every loss and social media outburst though, that seems less and less likely.

The safety is a free agent at the end of this year and Hitchens has cap casualty written all over his contract. If the linebacker is cut in 2022 (one year remaining on his deal), the franchise would forfeit a little over $4 million in dead cap according to Spotrac. Considering his normal cap hit would be $10.635 million and change, that’s a price that Veach might be willing to pay to release him.

This defense has broken down in 2021 and Kansas City might need to overhaul it completely. That starts by moving on from the expensive contracts that are weighing it down.

Hitchens has not lived up to his price tag. Mathieu is a solid safety, but he costs a pretty penny to employ. He’s also a loose cannon that is replaceable next season at age 30. Feel free to speak your mind on social media guys — at this point you’re just digging your own grave.