Kansas City Chiefs safety Tyrann Mathieu may be enjoying palm trees and fresh air ahead of NFL free agency but that hasn’t stopped him from wearing his heart on Twitter as he generally does.

The playmaker has been all over social media as we approach the start of the new league year and Mathieu’s big decision on whether to leave KC or return. For example, on March 9 he wrote: “Shame on me for thinking I was ever in control, this is GOD working only the way he could.”

Shame on me for thinking I was ever in control, this is GOD working only the way he could.

The impending free agent has been leaving breadcrumbs like this for weeks and only he knows the true meaning of each quote and statement, but most do seem calculated and measured. Only once did Mathieu appear to let his emotions get the best of him over the past week and it came in support of six-time All-Pro linebacker Bobby Wagner.

Yesterday on March 11, Mathieu fired off a vague message that read: “We gon make you eat them words..”

We gon make you eat them words..

Exactly six minutes later, he responded to a viral tweet from Wagner concerning his release from the Seattle Seahawks — which occurred earlier in the week. Here is the screenshot of the tweet, which has since been deleted by Mathieu. 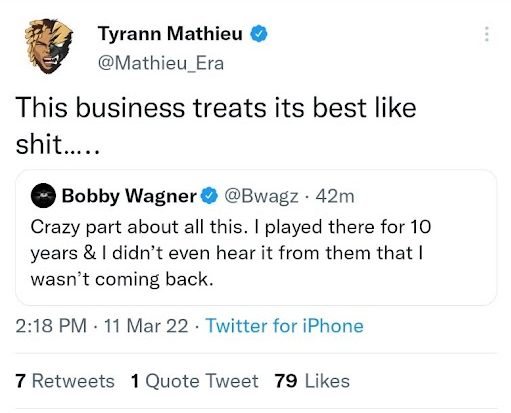 “This business treats its best like s***,” replied the safety after Wagner claimed that Seattle did not inform him of his release before it occurred.

The Seahawks’ decade-long starter voiced: “Crazy part about all this. I played there for 10 years & I didn’t even hear it from them that I wasn’t coming back.”

Reading Between the Lines

There is almost a question of which was more telling — Mathieu’s comment or the fact that he felt the need to delete it afterward?

Not a single person in the football community disagreed with Wagner’s sentiment, and it’s a well-known fact that the NFL is one of the most coldhearted industries there is. One minute players are stars, the next they’re discarded based on injuries or financial purposes.

The common expression is that “this is a business,” but that phrase overlooks the emotional toll of these tough decisions. It’s not just a game for an athlete, this is their profession, their family’s home, and their overall life that is uprooted at a moment’s notice.

Mathieu’s two cents only agreed with the popular opinion that Wagner’s treatment was undeserved and harsh, so why delete it?

It could be his agent told him to, as stuff like this could theoretically affect his next contract. Let’s be honest though, if any general manager doesn’t recognize that the ‘Honey Badger’ is a loose cannon on social media by now, this tweet probably won’t be the one that scares them away.

The other reason might be that Mathieu inadvertently revealed some of the details about his personal situation. As far as we know, the Chiefs have not offered the safety a dollar amount that he feels he has earned. If they had, we wouldn’t be speculating on his free-agent landing spot in 2022.

Mathieu may have been talking about Wagner, but it’s not hard to connect the dots on this one. If the safety also considers himself one of the NFL’s “best” — which he is, or at least was — the easy inference would be that he feels as though he’s being mistreated.

For the KC fans holding out hope that Brett Veach can still get a deal done, this is not a step in the right direction.

Loading more stories
wpDiscuz
0
0
Would love your thoughts, please comment.x
()
x
| Reply
After Bobby Wagner revealed a surprising detail about his release, Tyrann Mathieu let loose on the NFL in a tweet that has since been deleted.