After going to the playoffs just once in almost two decades and recently moving to a new city, the Las Vegas Raiders don’t have the luxury of time on their side. They need to build a winner and build it fast. Otherwise, opposing fans will continue to take over Allegiant Stadium as fan interest begins to wane.

With a second embarrassing blowout loss to the Kansas City Chiefs coming in the span of a month, it’s almost impossible to imagine that owner Mark Davis will plan to bring back interim head coach Rich Bisaccia and general manager Mike Mayock. The average fan might look at the Raiders over the last two decades and think that nobody would want this job.

However, Sports Illustrated’s Albert Breer believes it will be one of the most appealing openings this offseason. He even listed former Philadelphia Eagles head coach Doug Pederson as a name to keep an eye on:

Whenever the actual search starts, one name I think is intriguing would be ex-Eagles coach Doug Pederson. Given the scope of what’s gone down in 2021, and the makeup of the team, it’d make sense for the Raiders to go with someone who’ll bring experience. And Pederson, of course, coached in the AFC West over his three years in Kansas City.

Pederson won a Super Bowl with the Eagles in 2017 with a backup quarterback and outcoached Bill Belichick in the game. His record was 42-37 through five seasons with the team. He was fired under bizarre circumstances after the 2020 season. He was a good coach for the Eagles but his last season with the team is concerning. They went 4-11-1 and were marred with drama. Outside of that season, he did an excellent job with the team. If Davis feels like Pederson’s first four years in Philadelphia are more indicative of what he can do as a coach, he’d be a very strong head coaching candidate.

ALL the latest Raiders news straight to your inbox! Subscribe to the Heavy on Raiders newsletter here! 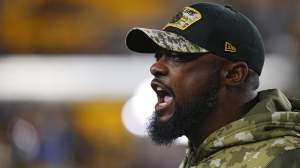 Pederson is a Super Bowl winner but he’s not a surefire hit due to how things ended with the Eagles. Davis may be intent on finding a head coach he knows will succeed. There are few head coaches more qualified than Pittsburgh Steelers head coach Mike Tomlin. In 15 years with the team, he has yet to have a losing season. In that time, the Raiders have four non-losing seasons, three of them being 8-8 years.

It’s hard to imagine Tomlin leaving Pittsburgh after so much success but things could be growing stale there. Breer detailed why the Raiders should at least reach out to the coach.

“If you’re the Raiders, would you turn over some rocks to see if Mike Tomlin, who’s facing quarterback and general-manager retirements in the coming years, and has been in Pittsburgh as long as Bill Cowher, could be pried free?” Breer wrote.

Breer had more to say.

“This isn’t to say, to be clear, that Payton, Tomlin or Carroll are eyeing the exits,” Breer wrote. “But if you’re one of those teams, and you’re looking at relatively shallow candidate pool, one where retreads could rule the hiring cycle, this would be a logical year to at least consider a swing for the fences.”

It would take a lot to get Tomlin away from the Steelers and could require that the Raiders trade draft picks to the Steelers. He’d be an excellent addition to the Raiders organization but it all comes down to what he wants to do.

Why Raiders Job Should Be Attractive to Candidates

The Raiders have been bad for a long time but it should be an appealing opening. Despite what the more restless fans would have you believe, this is not a total rebuild. Derek Carr is a good quarterback and there are other great quarterbacks who could want to be moved to Las Vegas if they get a great head coach. Also, there are a lot of good young pieces on the roster to build around.

Left tackle Kolton Miller, wide receiver Hunter Renfrow, tight end Darren Waller, defensive end Maxx Crosby, safety Trevon Moehrig, cornerback Nate Hobbs and more have all shown great potential. Davis isn’t a meddlesome owner and is willing to give his head coach a lot of power. Plus, any coach would get the benefit of brand new state-of-the-art facilities in Las Vegas. This is easily one of the most appealing jobs for an incoming head coach, which will work to the Raiders’ advantage.

I hope your right about being attractive. The huge disadvantage of ownership is Mark is not a football guy like his father and has to hire the brain trust! Paid insane amount for mediocre coach and gm what has changed now?
Many owners are not fb guys but have vast business knowledge and know how to hire!