The Las Vegas Raiders have lost five of their last six games with Derek Carr starting at quarterback. The losses aren’t all on him but in times of struggles, the most popular player on a football team will always be the backup quarterback. It doesn’t help that the Raiders have a dynamic backup quarterback in Marcus Mariota. With the season in free fall, fans would at least like to see the former Heisman Trophy winner get a few chances to make plays.

However, that’s not going to happen. The Raiders certainly aren’t going to bench Carr and it sounds like the team is apprehensive to even use Mariota in packages. Interim head coach Rich Bisaccia essentially ended any chatter regarding the team making a change at quarterback.

“Again, there’s been conversation all the time about what’s the plan for Marcus and when he comes in and what exactly he can do with it,” Bisaccia said Monday. “I don’t think we’re real excited about taking No. 4 [Carr] out from behind the center when he can be a productive player for us. And I thought yesterday he gave us a chance with some of the balls that he delivered to put us in position to score some points and we turned the ball over.

“I don’t ever think that one particular thing is going to move you in one direction or the other. So, we’d like to do a better job, really, in everything that we’re doing.”

ALL the latest Raiders news straight to your inbox! Subscribe to the Heavy on Raiders newsletter here!

Should Mariota Get More Playing Time? 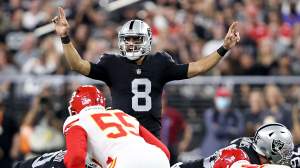 Based on the fact that Mariota hasn’t played many snaps yet, it’s clear that the Raiders do not believe he gives them a better shot to win than Carr. They are likely right as it’s easy to forget that Mariota was benched for another quarterback during his last year with the Tennessee Titans.

With that said, it’s Hail Mary time for the Raiders. They are not technically out of the playoff race yet. If they win out and go 10-7, they’ll have a strong shot at the wild card. That seems highly unlikely based on how they’ve played in recent weeks but not impossible. The Raiders offense is a mess right now and could use a spark. They shouldn’t bench Carr for Mariota as that would present a whole new set of issues but giving him some more opportunities to make plays throughout the game could give the offense the jolt of life it needs.

With the Raiders season in free fall, the team needs to find any silver lining it can. For Carr, he’s hoping that these tough times build character.

“Disappointment,” Carr said after Sunday’s 48-9 loss to the Kansas City Chiefs. “Definitely disappointed. Most of our guys work really hard and try our very best to put good stuff on tape and win football games. I didn’t expect that outcome. During the game, after the first turnover, second, I didn’t expect that. I felt great what [offensive coordinator Greg Olson] was calling. We would execute to a certain level, but execution is all the way to the whistle and we didn’t do that. Togetherness. It’s all we got. We all know everybody is against us. It’s going to be hard and all that kind of stuff, but that’s what builds character. People would say, take wins over character any day, but I was like well you need to have good character to eventually get it right. I see good characters where guys are going around to one another and saying, ‘Hey, man, I got your back.’”

Some are taking these comments from Carr as saying character is more important than wins. However, that’s not what he’s saying. He’s saying that the team needs to build character in order to win. That may not always be true but it certainly can’t hurt. Hopefully, Sunday’s beatdown against the hated rival built enough character for the team to actually start winning again.