An interesting and perhaps sobering aspect of the NBA is the age of its players. It’s an absolute trip to think about the longevity of these athletes and their ability to stay at the top of their game for so long — the most obvious example of which is Lebron James, who came into the league at the age of 18 in 2003 and would be square into the MVP race in 2021 had it not been for injuries.

This dichotomy in the NBA is one of its most fabled recurring storylines. Anthony Edwards, the number one overall selection in the 2020 NBA draft, was born in 2001. He was barely two years old when James played his first NBA game, so it’s hard to fathom what these players think when they have to, say, guard a player they watched and looked up to growing up.

Jayson Tatum, a budding superstar for the Boston Celtics, is another example. Born in 1998, he’s a two-time all-star who couldn’t legally buy a beer as recently as 2019. But that doesn’t mean he can’t flat out ball. He’s improved every year he’s been in the league, and he’s averaging 25.7 points and 7.4 boards per game this season.

Tatum participated in an “Ask Me Anything” session on Reddit’s /r/NBA on April 26 and gave one answer Clippers fans would find exciting. 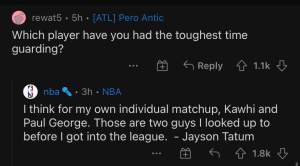 When asked which player the young star had the toughest time defending, he replied with the names of not one but two Los Angeles Clippers — Kawhi Leonard and Paul George.

When you look at the matchups the two Clippers wings have had against Tatum’s Celtics, Tatum’s selection of Leonard and George shouldn’t come as a huge surprise.

Leonard has a monster stat line against the Celtics as of late. Since Tatum entered the league in the 2017-18 season, Leonard has averaged 27 points and 3.6 assists in seven total games between the two teams, with the Celtics coming away with a win.

So it’s easy to see why other NBA stars would have a hard time with Leonard. His sheer size and athleticism paired with his touch on mid-range jumpers make him lethal on the offensive end.

On its face, it makes sense why Tatum would have a tough time with George. The two come from the same prototype of modern-day NBA wings. They possess a shot with range, strong ball-handling skills and elite athleticism that helps them get around bigs in the paint. Match that with their 6-foot-8 frames and you have a dominant offensive wing.

George entered the NBA when Tatum was just 12 years old. There’s a more than solid chance that the young star modeled his game after the former Pacers and Thunder superstar.

But when you look at the numbers, Tatum’s answer becomes more puzzling.

In seven games, Tatum’s Celtics have taken six games from George, with the lone win coming in November 2019 in their first meeting since George joined the Clippers.

George has averaged 24 points per game in those seven meetings, including a 37 point performance, but the head-to-head record suggests that Tatum hasn’t had too tough of a time with the player he looked up to growing up.

Discover more from Heavy on Clippers↓

Loading more stories
wpDiscuz
0
0
Would love your thoughts, please comment.x
()
x
| Reply
Tatum participated in an "Ask Me Anything" session on Reddit on April 26 and gave one answer Clippers fans would find exciting.