The Los Angeles Lakers are nearing their postseason debut and some positive injury news could be arriving sooner than later for fans of the purple and gold.

After fracturing his thumb during a practice last month, Lakers veteran guard Rajon Rondo is set to clear quarantine on Monday in his return to the bubble. The Lakers aren’t quite sure when he will be available for action, but his presence alone for a playoff push should be a big help.

“Luckily he’s here now, hopefully we can see him out of quarantine because we need his mind and his IQ,” Lakers guard Danny Green said. “His input is going to be huge for us whether he’s playing or not to help us advance to the next step.”

While the Lakers are optimistic on when Rondo can return, head coach Frank Vogel isn’t setting a timetable for his return just yet. Rondo was injured on July 12 and his initial diagnosis was 6-8 weeks.

“We’ll get him on the court and see where he’s at, but no specific timetable yet on him,” Vogel said. 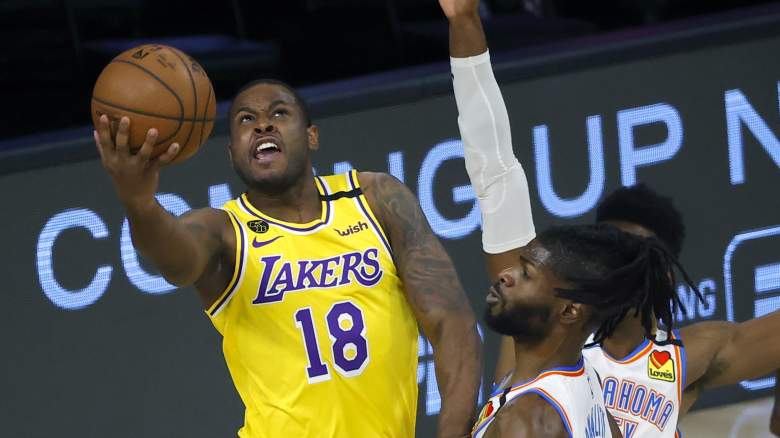 The Lakers were in need of guard help with Avery Bradley staying home from the restart and Rondo being injured. Luckily, Dion Waiters was waiting in the wings for his opportunity and has fit in nicely in purple and gold during his time in the bubble so far. He’s scored in double-digits in five of the eight games and has given the Lakers another ball-handler in the second unit with Rondo out. Despite Rondo being injured and not currently in the bubble, Waiters said that he has helped him as he gets integrated.

Damian Lillard Will Be Major Challenge to Guard for Lakers

Rondo was going to be a key cog for the Lakers in Orlando. He has averaged 20.5 minutes per game this season — the lowest of his career. However, he’s found a way to be a contributor with 7.1 points, five assists and three rebounds per game. He’s also a big veteran presence with championship experience, something that is not easily replicated.

Rondo would have also be a key piece defensively for the Lakers in their upcoming first-round matchup against the Portland Trail Blazers, who boast an incredible backcourt.

Behind Lillard — who was named the Bubble MVP — the Blazers went 6-2 in seeding games and he averaged more than 40 minutes per game. Lillard averaged 37.6 points in the bubble to go with 9.6 assists. Not to mention his co-star at guard CJ McCollum, who can go off at any time.

Loading more stories
wpDiscuz
0
0
Would love your thoughts, please comment.x
()
x
| Reply
The Los Angeles Lakers are nearing their postseason debut and some positive injury news could be arriving sooner than later for fans of the purple and gold.