Kyle Kuzma witnessed some dark times in the Los Angeles Lakers organization during his first two seasons in the league, finishing on the outside looking in on the playoffs without too many bright spots.

After the Lakers romped past Utah 116-108 on Monday night to lock up the top seed in the Western Conference, he had a message for the fans who stood loyal to the purple and gold during the down years.

The Lakers haven’t made the playoffs since the 2012-13 season, finishing well under .500 the last six seasons. But having LeBron James and Anthony Davis has helped propel the Lakers to the top of the Western Conference for the first time in a decade.

“If you’re winning enough games to secure the No. 1 seed, you’re building the right habits that are going to be necessary for you to win in the playoffs,” Lakers coach Frank Vogel said on Monday night. “Obviously we have bigger aspirations than the No. 1 seed, but we are proud of the accomplishment and we’ll enjoy it while we’re getting ready to get our group ready for the playoffs.” 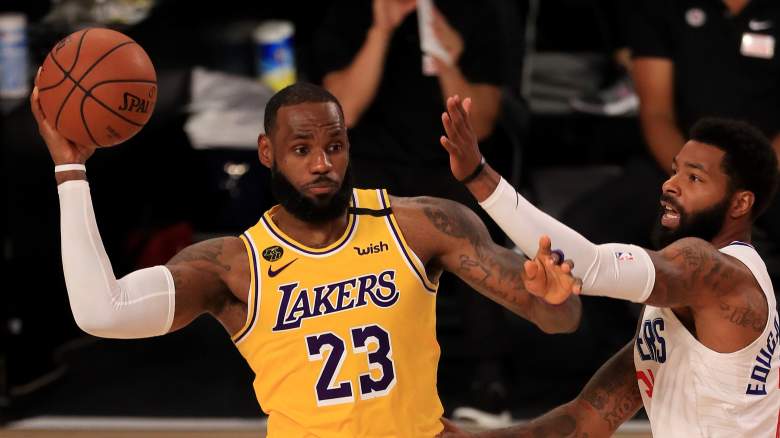 James has been a big part of the puzzle for the Lakers, putting up MVP-like numbers in year 17 of his career. While his production might be down a bit in the bubble, James has stepped things up on the defensive end.

“Seeing him play defense just lights a fire under everyone’s butt,” Kuzma told reporters this week. “It’s championship time, and he’s just being a great leader by showing us the way. Especially starting on the defensive end, (in) year 17 getting after it. He’s had great leadership throughout the quarantine, training camp and even now.”

James has played at least 34 minutes in each of the three bubble games so far. The Lakers are 2-1, with James putting up a near triple double (22 points, eight rebounds, nine assists) against Utah. James is seeking his fourth NBA title with a third team. He won a pair in Miami and brought one back to Cleveland in 2016.

After a miserable night in a loss to the Raptors where he shot the ball just seven times and scored 14 points, Davis came out on a mission against the Jazz. Davis scored 42 points and notched 12 rebounds in the matchup, including a late 3-pointer that was a dagger to the heart of Utah fans.

“Coach just told me to be more aggressive,” Davis said after the game. “He felt like, and I felt like too, that I just kind of played into Toronto’s defense, accepted the double-team. I was making the right plays, but I still have to be aggressive at the same time.”

The Lakers could choose to push cruise control for the final five games with the top seed locked up. Four of the Lakers final five matchups are against Western Conference foes, starting with the Thunder on Wednesday.

Loading more stories
wpDiscuz
0
0
Would love your thoughts, please comment.x
()
x
| Reply
Kyle Kuzma has a message for the fans who stood loyal to the purple and gold during the down years.