LeBron James felt something special during the first quarter of the Los Angeles Lakers dominant Game 4 victory against the Portland Trail Blazers.

Like many other, James looked at the scoreboard and realized the score: Lakers 24, Blazers 8. The numbers were significant because Monday was 8/24, also known as Mamba Day — which celebrates the memory of Lakers legend Kobe Bryant, who tragically died in a helicopter accident in January.

LeBron after the game the Lakers had dedicated to Kobe Bryant : "When I looked up and saw we were up 24-8, I was like, okay, he's here in the building. It’s a beautiful, beautiful night for our franchise and something we will always remember – this moment.” pic.twitter.com/Q4AekQHNjP

James said when he saw the score, he knew something special was going on.

“It’s been an honor to put on a Laker uniform, even before the passing of the great Kobe Bryant. But tonight was another one of those moments for myself and this organization, for all the players to wear those uniforms that were inspired by him and his mind and creativity. To go out there one day removed from his birthday and on his day of 8/24, to be able to have a game on this day — the stars aligned. I did notice that we were up 24-8 because throughout the course of the game, I’m always looking if we’re up, if we’re down, what’s all the team fouls and all the things of that nature. And when I looked up there and saw 24-8, I was like ‘Okay, he’s here in the building.’ It was a beautiful night for our franchise and something we’ll probably always remember.”

LeBron's full comments on getting to play on Kobe Day. pic.twitter.com/vudrk0Xlxb

The Lakers put on a show Kobe would have been proud of in Game 4, overpowering the Blazers 135-115. They accomplished the feat wearing the “Black Mamba” jerseys that honored Kobe Bryant and his daughter, Gianna.

“We were able to win this on a very emotional night for us wearing the Kobe jerseys and realizing the first time we played a game after the tragedy was also against Portland,” Laker star Anthony Davis said. “They were able to take that one from us at home. We just wanted to make sure we did everything we could to get this win for him.”

The Lakers victory was never in question, with LA leading 80-51 at the half. James netted 30 points on 10-of-12 shooting, adding 10 assists and six rebounds. Davis had 18 points in 18 minutes before exiting with back spasms. 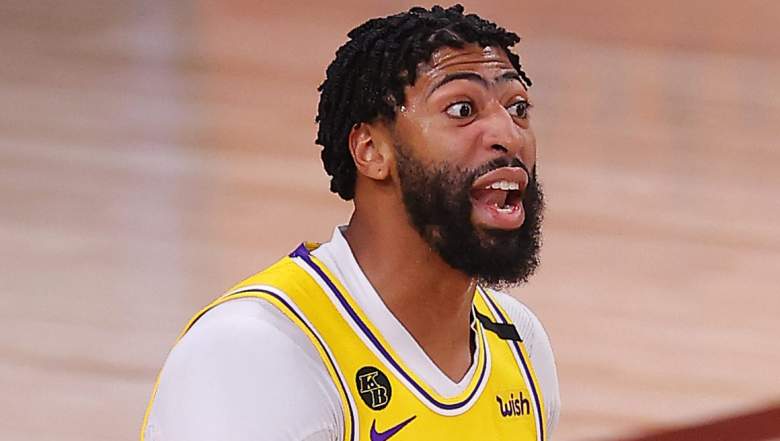 Despite sitting out with the back spasms in the second half, Davis was confident that he’d be back in action for what could be the clinching Game 5 on Wednesday. Considering the lead was comfortable in the season half, there was simply no need for Davis to push it.

“100 percent,” Davis said about his prospects of playing while speaking to Lakers reporter Mike Trudell. “No question I’ll be playing in Game 5.”

"100%. No question I'll be playing in Game 5." @AntDavis23 with @LakersReporter on his status for the next game and tonight's special #Lakers win on Kobe Day. pic.twitter.com/t2KOK2negI

The Blazers have their own injury issues going on, with Bubble MVP Damian Lillard now dealing with a knee injury to go with his dislocated finger. Lillard had just 11 points in the loss — his lowest total since Jan. 1.

Lillard underwent an MRI after the game, the results of which were inconclusive, per ESPN.