Getty LeBron James of the Los Angeles Lakers points at the two retired jerseys in the rafters to honor Kobe Bryant.

LeBron James showed up to the arena for Game 4 against the Portland Trail Blazers repping his” Mamba Mentality,” sporting a Kobe Bryant jersey that had No. 8 on the front and No. 24 on the back.

The Los Angeles Lakers superstar posted another photo of the jersey in his locker later in the day.

Other Lakers also had pregame fits that paid respects to Bryant, who won five championships with the Lakers during his storied career.

"If you really want to create something that lasts generations, you have to help inspire the next generation." – Kobe Bryant pic.twitter.com/F6Rt8Qijpg

Monday — 8/24 — is known as Mamba Day, honoring the late Lakers legend Kobe Bryant, who passed away earlier this year in a tragic helicopter accident. The Lakers will wear their “Black Mamba” jerseys for their matchup with the Blazers, which also feature a heart with the number “2” on the right side, representing Gianna “Gigi” Bryant, who passed away in the crash as well.

The jerseys went on sale on the SNKRS app and almost immediately sold out. Many can already be found on eBay and other sites for hundreds of dollars, drawing the ire of many who want to celebrate Bryant’s memory with the jersey.

Kobe taught us to be better. A better scorer, better mentor, better father, better champion. Today, on his birthday, we continue his endless pursuit of better.

Sunday would have been Bryant’s 43rd birthday and the Lakers spent it in an appropriate way — putting in extra work in the gym, getting up 100 free throws each. The team also took some time to reflect on Kobe’s legacy.

“I mean, especially as a 2-guard, if you can model your career after anybody at that wing position, it would be a Kobe person. The career, the accolades, the championships and everything else,” veteran guard JR Smith told ESPN. “I look up to him just as much as I look up to [Michael] Jordan, now that I think about it. He was just so special in everything that he did.”

James took to social media to share a video of Team USA singing happy birthday to Kobe on his 30th birthday.

Lakers coach Frank Vogel said that Bryant’s memory has been with them during the unprecedented NBA season since his death in late-January.

“It’s been important to us all season to embody what he stood for and represent it and to exhibit that ‘Mamba Mentality,'” Vogel told reporters. “So maybe it will be exemplified some tomorrow, but it’s really been with us every step of the way.”

James gave a stirring speech in the Lakers first game back at Staples Center following the death of Bryant.

“The fact that I’m here now means so much to me,” James told the crowd in his pregame address in January. “I want to continue along with my teammates, to continue his legacy, not only for this year, but for as long as we can play the game of basketball that we love because that’s what Kobe Bryant would want. 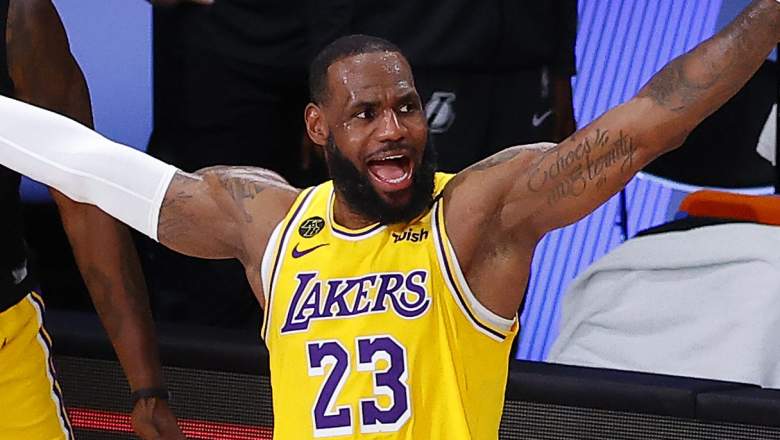 Many people were picking against the Lakers in the first round, No. 1 vs. 8 matchup against the Blazers, especially when they stumbled in Game 1. But the purple and gold squad has found their footing and James is coming off his best performance yet, notching 38 points, 12 rebounds and eight assists.

James took to Instagram to deliver his latest message prior to Game 4, posting a picture of him snarling with the caption, “MOOD.”

The Lakers are seven-point favorites for Game 4 with the total set at 226.5 points.