The Portland Trail Blazers are hot and have their sights set on a first-round matchup with the Los Angeles Lakers if all goes according to plan. But things between the two Western Conference foes are already heating up, with Blazers skipper Terry Stotts taking a shot at the Lakers during a recent press conference.

Stotts appeared to be caught on a hot mic calling out the top seed in the Western Conference over their lack of mask etiquette inside the bubble.

“The Lakers don’t wear these but I do,” Stotts said before putting a mask on, drawing a reaction from the reporters on hand.

Stotts takes a shot at the @Lakers 😷 #RipCity pic.twitter.com/JEx0Ofq1U5

Stotts may have a point. Lakers center Dwight Howard made some noise early in the bubble, drawing a warning for not wearing a mask.

“I understand the whole ‘wear a mask’ and all that stuff, so nobody is not trying to do anything out of order. But, you know, again, I understand that there always has to be some type of controversy somewhere. And I’m not in no controversy. You know what I’m saying? I get it. It’s some clickbait.”

On top of that, a quick glance at the Lakers’ press conferences compared to the Blazers’ is telling (h/t NBC Sports Northwest).

The Blazers have been the talk of the bubble so far, going 5-2 and crawling up the standings. Portland’s latest win against the Mavericks — behind 51 points from Damian Lillard — helped put the team in pole position with one game to go. If they beat the undermanned Nets on Thursday, the Blazers will have the upper-hand against the Grizzlies, Spurs or Suns in the play-in series.

While much is still to be figured out down the stretch, whichever team lands the No. 8 seed will face the No. 9 seed in a play-in game, with the lower seed having to beat the higher seed twice, but the higher seed only needing to win once.

“Ain’t nothing I want more,” Lillard said of the playoffs, per The Associated Press. “When I came here (to Disney World) I told them I’m not here to waste my time. Our work ain’t done yet but we’re fighting for it.” 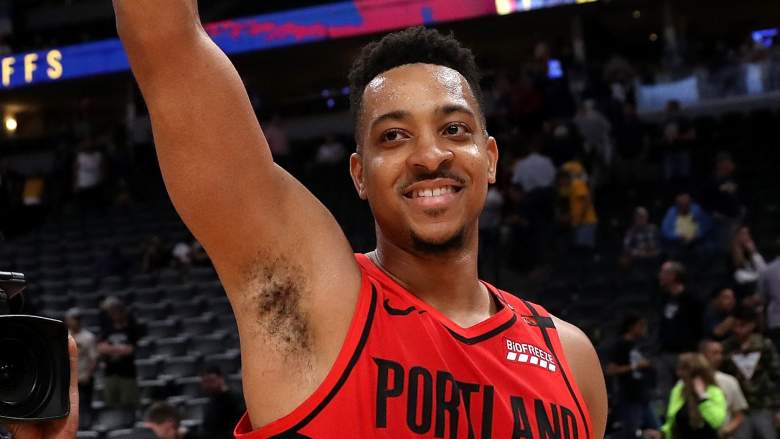 It hasn’t been all rainbows and butterflies for Portland in Orlando. Following Tuesday’s win star guard CJ McCollumn announced that he’s playing through a fracture in his lower back. McCollumn had just eight points against Dallas, but played 39 minute. He’s played at least that or better during each game in the bubble.

“He’s a little bit banged up. He’s making no excuses or looking for no way out,” Lillard said. “He’s thuggin’ it out for the team and being out there for us, and fortunate for us, him doing that meant he was out there for those last free throws and came through for us.”

The Los Angeles Lakers and Portland Trail Blazers could be first-round opponents in the playoffs and things are already heating up between the squads.