If the Los Angeles Lakers are going to get by the Houston Rockets in the Western Conference Semifinals, they’re going to have to put a different product on the floor than what they showed in Friday’s 112-97 Game 1 Loss.

That could include Anthony Davis shifting from his normal power forward position to center, a spot he has not been fond of. After the series-opening loss, Chris Haynes of Yahoo Sports reported that Davis is willing to make the change against the Rockets, which is a major paradigm shift for the former No. 1 overall pick.

Anthony Davis isn't fond of playing center, but he's willing to do it against the Rockets, sources tell @ChrisBHaynes.

Davis has previously been very resistant to play center, as evident from his introductory press conference with the Lakers.

That being said, moving to the five against the Rockets is a different story than most other teams. PJ Tucker, who is 6-foot-5, has been playing “center” for the Rockets and had a lot of success against Davis in Game 1. Tucker — who makes up for his lack of size with tenacity — was the primary defender on Davis for 26 half-court possessions in Game 1 and the Lakers All-Star managed 0 points on those possessions, per ESPN Stats and Information. He only attempted one shot.

When it comes to lineup changes, Lakers head coach Frank Vogel has been keeping his cards close to the vest.

“We’ve got to be better in a lot of things that we do. We definitely could’ve played better and in more rhythm, and there are some things we can do differently as well,” he said. “We’ll look at the tape, we’ll see what approach we’re going to have for Game 2 and we’ll go from there. … I’m not going to tip my hand about Game 2. Like I said, we’ll go to the tape, we’ll look at a lot of different ways we can go, but it starts with just being better with what we did. We were too careless throwing the ball all over the court, our turnovers and taking quick shots.” 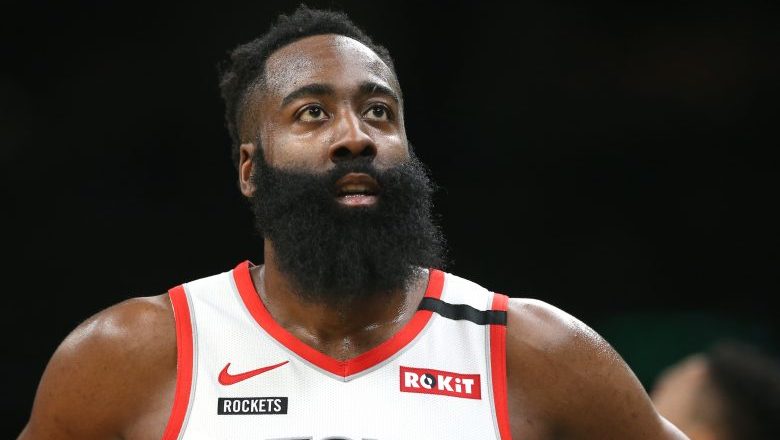 GettyJames Harden #13 of the Houston Rockets

The Lakers had 17 turnovers in Game 1 that the Rockets were able to quickly turn into a whopping 27 points. Turnovers along with unorganized offensive possessions helped Houston balloon the lead to as big as 19 in the fourth quarter.

LeBron James — who had 20 points, eight rebounds and seven assists in the loss — said the Rockets speed was shocking, comparing them to the “Greatest Show on Turf.”

“It’s like in the early 2000s, when the St. Louis Rams were The Greatest Show on Turf,” James told Yahoo Sports. “People would always say how they’d scout them, and scout them, and scout them. Until they got on the field, and they’d see Isaac Bruce and Torry Holt, Marshall Faulk and Az Hakim, and all those guys. And they were like, ‘We need to play them again.’ Because there’s no way you can simulate that speed. Getting out on the floor and having a Game 1 will give you a good feel for it.”

If Davis does slide to center, it would open up more opportunties for minutes in the rotation, with traditional big men Dwight Howard and JaVale McGee — who played 24 minutes combined in Game 1 — taking a back seat.

That could include veteran guard Rajon Rondo, who made his bubble debut in Game 1. Rondo missed time with a fractured thumb he suffered in the preparation for the restart and he’s also been dealing with back spasms. He managed eight points, four assists, three rebounds and two steals, but the offensive looked unorganized when he was on the floor.

“It is a challenge, working in a new player to your rotation at this stage in the playoffs,” Vogel told reporters after the game. “But Rajon is one of the smartest players in the league, and obviously our guys’ IQ raises when he’s on the court. He’s definitely going to help us this series.”

“He’s a great player and a very cerebral player, so he knows the game very well,” Davis said of Rondo. “I don’t think it’ll take that much time to get him back acclimated with the team. He made some shots today, made some good plays for us.

“Game conditioning is tough and when you haven’t played, and then your first game is in the Western semis. We’ll get him back acclimated with the team and just try to play from there.”

Loading more stories
wpDiscuz
0
0
Would love your thoughts, please comment.x
()
x
| Reply
Lakers star Anthony Davis is willing to shift from his normal power forward position to center, which he has not been fond of in the past.