Dion Waiters missed his second consecutive game on Thursday, but there appears to be some optimism that the Los Angeles Lakers  guard could be available at some point in the series against the Houston Rockets.

Waiters exited Game 2 after playing just three minutes off the bench and the team said he suffered a groin injury. Lakers head coach Frank Vogel gave an update on Waiters in advance of Game 4, saying it’s within the realm of possibility that he returns.

“I think it’s still possible,” Vogel said, per Ryan Ward. “He’s still day-to-day. We’ll figure out how he continues to respond to treatment.”

Frank Vogel on if Dion Waiters could still play in this series: "I think it's still possible. He's still day-to-day. We'll figure out how he continues to respond to treatment."

After Waiters played five minutes in Game 1, going 0-of-3 from the field, there were clamors for him and JR Smith to see more time on the court. He hadn’t played a game for the Lakers until they arrived in the bubble and has scored just 10 points in 35 minutes during the playoffs. However, Waiters showed he still had it during some of the seeding games, scoring in double-digits in five of the eight games.

If the series against the Rockets does get extended to a sixth or seventh game, Waiters could prove to be a valuable asset off the bench, with the Lakers deciding to go with a smaller look. For Game 3, Markieff Morris started in place of center JaVale McGee. Morris, a 6-foot-8 forward, has played 23 minutes each of the last two games. Morris started next to Danny Green, Kentavious Caldwell-Pope, LeBron James and Anthony Davis.

Rajon Rondo had a tough Game 1 off the bench, but the Lakers faith in the veteran paid off, as he was a difference maker in Games 2 and 3.

The man known as “Playoff Rondo” scored 21 points — just two off of his season high — and notched 9 assists. Most importantly, Rondo orchestrated the offense down the stretch in key moments.

“You have people that you can trust to be in a foxhole with you, not only from a basketball aspect, but from a cerebral aspect,” LeBron James said of Rondo. “There’s not many guys in our league who can do that in our league, and in the postseason it’s gigantic. Having ‘Do on our side, it definitely helps.”

JR Smith Can be Spark Plug for Lakers if Needed 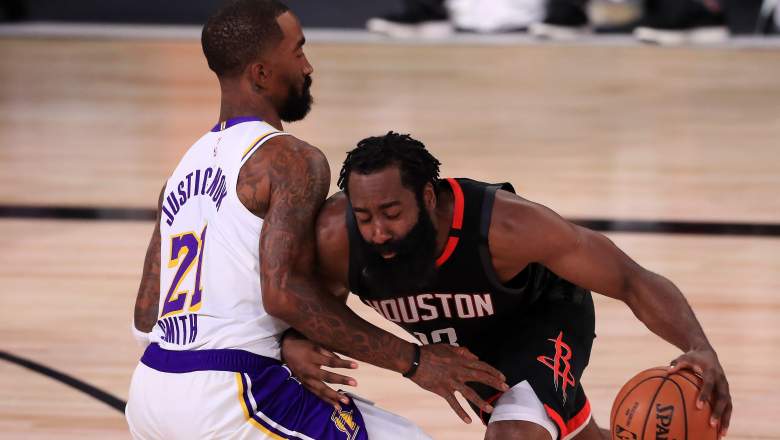 The Lakers used mostly an eight-man rotation in their Game 3 victory against the Rockets to take a 3-1 lead. McGee and guard J.R. Smith saw time, but combined for just 10 minutes.

Smith is another option if the Lakers decide to go with a smaller look. He had his best performance of the playoffs in Game 2 of the first round, firing up 12 shots in 22 minutes, scoring 11 points. Smith landed with the Lakers just before the bubble after 20 months away from the NBA. He said previously in an interview with Kyle Goon of the Southern California News Group he was depressed without basketball in his life.

“Being somebody who has been around the league predominately for most of their adult life, when that’s kind of taken away from you, it kind of gives you that culture shock and you obviously don’t understand what you lost until it’s gone,” he said. “So, for me more than anything, I just want to appreciate the moment for what it is and whether it be next year or never again, I just want to enjoy every possible moment that I get.”

Now he has a chance to get a second NBA championship ring playing alongside his buddy LeBron James, who he won a title with in Cleveland.

Loading more stories
wpDiscuz
0
0
Would love your thoughts, please comment.x
()
x
| Reply
Dion Waiters missed his second consecutive game, but there appears to be some optimism that the Los Angeles Lakers  guard could be available to return soon.