The Denver Nuggets completed what most labeled as impossible on Tuesday night, crawling out of a 3-1 hole against the Los Angeles Clippers and frankly embarrassing one of the most hyped squads in the NBA 104-89 in Game 7.

The Nuggets were propelled by monster performances from their two starts, Jamal Murray and Nikola Jokic. Murray poured in 40 points, 4 rebounds and 5 assists, while Jokic piled up a massive triple-double with 16 points, 22 rebounds and 13 assists.

The Los Angeles Lakers —the top seed in the Western Conference — are up next for the Nuggets and Murray had a message for their purple and gold rivals.

“They got to worry about us too,” Murray told ESPN’s Rachel Nichols after the game.

“We can’t go out there and think about them,” Jokic chimed in, referring to Lakers stars LeBron James and Anthony Davis. “Effort and having fun. It’s simple for us.”

“They gotta worry about us too.”

Jamal Murray and the Nuggets are ready for the Lakers. (via @Rachel__Nichols) pic.twitter.com/c1ReAJNOVq

After pulling off the massive upset, sending Clippers superstars Paul George and Kawhi Leonard packing, Murray was sure to call out all those who doubted his Nuggets.

“You got Shaq, you got Charles (Barkley), I think Zach Lowe his name, I don’t even know,” Murray said in his post-game press conference. “Stephen A. (Smith), all y’all better start giving this team some damn respect. Because we put in the work. We got a resilient team. We shouldn’t have been down 3-1 but to come back from 3-1 against the Clippers is a big achievement so it’s fun just to change that narrative.”

"All y'all better start giving this team some damn respect."

Jamal Murray calls out the media after Game 7. pic.twitter.com/GqOuFfJwYU

The Nuggets still aren’t getting much respect. Denver opened as a 6.5-point underdog to the Lakers for Game 1.

The Clippers were roasted relentlessly online after losing to the Nuggets. But some unexpected trolling came from Lakers great Magic Johnson, who is usually very conservative in his Tweets.

“The Clippers choked again. They choked against Houston in 2015 and they choked tonight against the Denver Nuggets,” Johnson wrote, before adding more. “The Lakers will always own Los Angeles!! It will never change.”

The @Lakers will always own Los Angeles!! It will never change 😁

The Clippers and Lakers were penciled in for an all LA Western Conference Final before the season even started, with both squads making blockbuster moves in the offseason. Both LA squads and the Milwaukee Bucks were bubble favorites, while the Nuggets were around 16-1 to win it all when the restart began.

Lakers Have Been Staying Sharp in Preparation 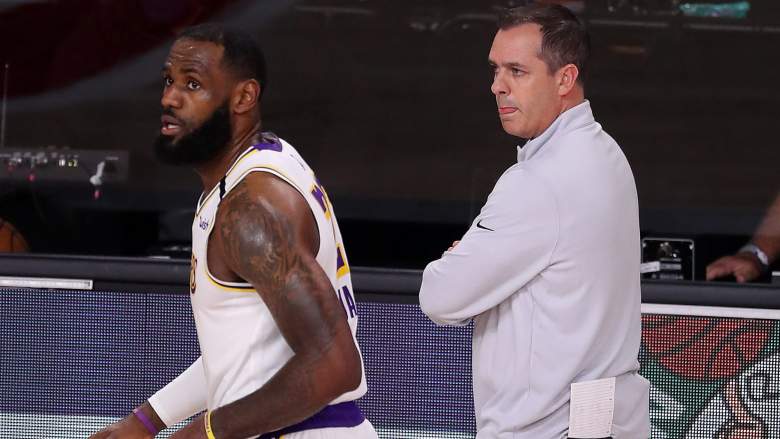 The Western Conference Finals are scheduled to start on Friday, which will be six days since the last game the Lakers played. Lakers head coach Frank Vogel has been looking to find the balance between rust and rest during the extended break.

“It’s definitely a challenge, there’s no doubt about that,” Vogel told reporters Monday. “And the message with our group today is: You’re either getting better or you’re getting worse. And we not only want to stay sharp, we want to get better every time we step on the basketball court. So, that’s got to be your focus.”

The Lakers and Nuggets squared off four times this season. LA took three of those matchups, one in overtime. LeBron James was inactive for the Nuggets lone victory back in December.

Loading more stories
wpDiscuz
0
0
Would love your thoughts, please comment.x
()
x
| Reply
Denver Nuggets guard Jamal Murray had a message for the Lakers after advancing to the Western Conference Finals.