McGee started the game and played eight minutes before exiting with what the team was calling “ankle pain.” He’s having an MRI to assess the injury.

JaVale McGee is getting an MRI on his left ankle, Frank Vogel says. The Lakers want to see how Dion Waiters’ strained left groin responds to treatment overnight.

While it would have been nice to have McGee available, the Lakers chose to go with a smaller look down the stretch to combat the Rockets’ small-ball lineup. Dwight Howard was a DNP-coach’s decision.

McGee was mic’d up for the game and appeared to be having a good time on the sideline.

Javale's Celebrations are too funny 😅

Waiters played just three minutes off the bench before suffering his injury, which was diagnosed as a pulled left groin.

JaVale McGee is out for the game due to left ankle pain, joining Dion Waiters (groin).

Lakers coach Frank Vogel was fairly secretive about what his lineup would look like heading into Game 2, and while there were no changes to the starters, McGee’s limited time on the court and Howard being on the bench signaled a shift in philosophy.

After Waiters played five minutes in Game 1, going 0-of-3 from the field, there were clamors for him to see more time on the court. Waiters hadn’t played a game for the Lakers until they arrived in the bubble and has scored just 10 points in 35 minutes during the playoffs. That being said, Waiters showed he still had it during some of the seeding games, scoring in double-digits in five of the eight games. 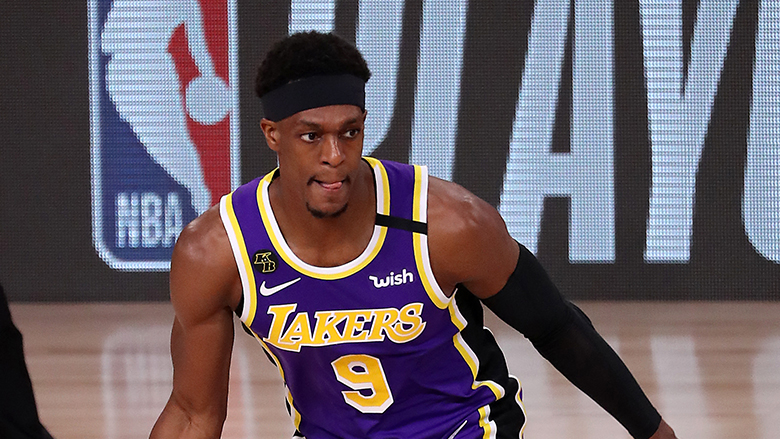 Veteran guard Rajon Rondo made his much-anticipated return from injury in Game 1, but was met with criticism after a lackluster performance. He tallied 8 points and 4 assists in 25 minutes off the bench, but also had 4 turnovers and hit only 3-of-9 shots.

Rondo’s performance in Game 2 was much better from the jump. He helped propel the Lakers during their first-half run and led the team in plus-minus. The Lakers had been firm that they had faith in Rondo and valued his presence in the lineup.

“Rajon is one of the smartest players in the league, and obviously our guys’ IQ raises when he’s on the court, so he’s definitely going to help us this series,” Vogel said.

Lakers star Anthony Davis echoed the sentiment of his head coach on Rondo.

“He’s a great player and a very cerebral player, so he knows the game very well,” Davis said. “I don’t think it’ll take that much time to get him back acclimated with the team. He made some shots today, made some good plays for us.

“Game conditioning is tough and when you haven’t played, and then your first game is in the Western semis. We’ll get him back acclimated with the team and just try to play from there.”

Lakers Hang to Even Series Against Rockets

Game 3 between the Lakers are Rockets is scheduled for Tuesday.