With trades becoming more realistic as December 15th approaches and many names becoming available, the Los Angeles Lakers will be a team to keep an eye on. They don’t have much financial flexibility but there are ways for them to make a notable trade. A name to keep an eye on is Detroit Pistons forward Jerami Grant.

At 4-22, the Pistons are the worst team in the NBA. Outside of rookie top draft pick Cade Cunningham, Grant is the team’s most valuable trade asset. Detroit needs to focus on the future and the veteran forward could get them some good young pieces. According to Shams Charania of The Athletic, multiple teams have pursued a trade for Grant, including the Lakers:

Jerami Grant is one of the most sought-after players in a potential trade, with the Lakers and Trail Blazers among the teams pursuing the Pistons’ versatile forward, sources said. Grant will miss extended time with torn ligaments in his right thumb, but that is not expected to impact his trade market. Dozens of teams call the Detroit front office about Grant each week, and sources said the team is open to a possible deal.

Grant is injured right now, which obviously will complicate his trade market but as Charania noted, it won’t affect the Pistons’ ability to move him. 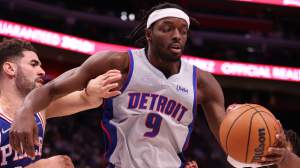 GettyDetroit Pistons forward Jerami Grant on the court during a game against the Philadelphia 76ers.

It shouldn’t come as a surprise that the Lakers are in on Grant. He’s averaging 20.1 points a game and is known for being a stout defensive player. He’s played a bit of power forward so the team could put him there in small-ball lineups when Anthony Davis is at center.

A starting lineup featuring Davis, Grant, LeBron James and Russell Westbrook is perhaps the most talented in the NBA. That said, none of those four guys are known for being elite 3-point shooters. Grant only hits 34.6% of his 3-point attempts throughout his career. Wayne Ellington or Malik Monk would likely need to be part of the possible starting lineup to help space the floor a bit. Grant could also be the Lakers’ top bench player, which would certainly give the second unit a huge boost.

What Trade Could Lakers Offer Pistons?

The thing that makes trading for Grant tricky is that he’s getting paid over $20 million a year. The only players making big money on the Lakers are Westbrook, LeBron and Davis. None of those three are about to get traded to Detroit.

Any possible trade for Grant would have to start with Talen Horton-Tucker. He’ll be an interesting piece for the Pistons as he’s only 21-years-old and could be a key player in a rebuild. Los Angeles would also need to tack on Kendrick Nunn to make the money work. He’s another young guard who the Pistons wouldn’t mind having. The Lakers could throw in one more minimum player like Kent Bazemore to make the money work. If Grant’s healthy and the goal is to win a championship this year, this wouldn’t be a bad deal for the Lakers to make.

READ NEXT: LeBron James Reacts to Lakers HBO Series Amid Rumors of Controversy

Loading more stories
wpDiscuz
0
0
Would love your thoughts, please comment.x
()
x
| Reply
The Los Angeles Lakers are in the market to try and land the Detroit Pistons forward.