Not everyone has been happy to see LeBron James and the Los Angeles Lakers celebrate their NBA championship, including former Golden State Warriors big man Mo Speights.

Speights took to social media to call out James for celebrating his fourth career title, sharing a meme that read: “Back then we used to celebrate threepeats,” with pictures of Michael Jordan and Kobe Bryant. “Now kids are out there celebrating four titles in ten tries and call it greatness.”

Speights weighed in with the caption saying: “Just the messenger.”

Speights got some immediate blowback after sharing the image and quickly responded, backtracking a bit on what the intention seemed like.

“No shots to Bron he is one of the best players to ever touch the court!!! I respect the game in the great players!!!!” he wrote. “I have my own opinion tho so I don’t really care what the next person have to say lol so take it how you want it.” 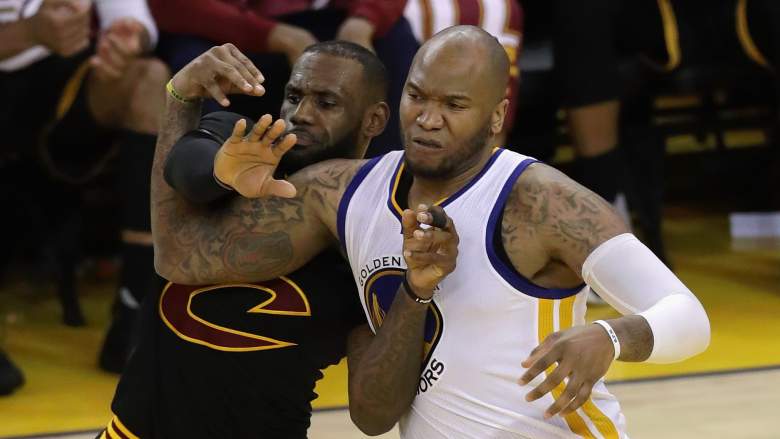 James and Speights have history. Speights was critical of James back in 2016 when Draymond Green was suspended after hitting the then-Cavaliers superstar in the groin.

“It’s messed to suspend a man over nothing. If somebody put their balls on your head, what are you supposed to do?” Speights said at the time after tweeting an emoji of a baby bottle, insinuating James was being a baby. “A guy does something like that, you kind of lose respect for him. I had a lot of respect for LeBron over his career, since he was in high school. But, do things like that to get a guy suspended? That kind of disrespectful.”

James went on to lead the Cavaliers back from a 3-1 deficit and to their first NBA title.

LeBron James After Title: ‘What They Gone Say Now?’

James hasn’t been shy about calling out his haters after a fourth NBA title, delivering one of his most ruthless messages on Instagram Monday.

“WHAT THEY GONE SAY NOW?!?!” he wrote. “I know they’ll make up another criteria that nobody else has ever had in the history of the game. But guess what though, bring it on, please! Heavy is the head that holds the [crown] they say. Let’s get it!”

UP IN 💨 TOUR. WHAT THEY GONE SAY NOW?!?! I know they’ll make up another criteria that nobody else has ever had in the history of the game. But Guess what though, bring it on please!! Heavy is the head that holds the 👑 they say. Let’s get it! #ThekidfromAKRON🤴🏾 #RevengeSZNCompleted😉

There will always be arguments by the opiners between Michael Jordan and James, but the Lakers star just wants one thing — respect.

“For me to be a part of such a historical franchise, it’s an unbelievable feeling not only for myself, but for my teammates, for the organization, for the coaches, for the trainers, for everybody that’s here,” James said on the court after winning the title and his fourth Finals MVP. “We just want our respect. Rob [Pelinka] wants his respect. Coach [Frank] Vogel wants his respect. Our organization wants their respect. Laker Nation wants their respect. And I want my damn respect, too.”

Read More
Basketball, NBA
Not everyone has been happy to see LeBron James and the Lakers celebrate their NBA championship, including former Golden State Warriors big man Mo Speights.