Rick Ross doesn’t lack any passion when it comes to his Miami Heat, but “Da Boss” might be a bit too optimistic about their chances in the NBA Finals against the Los Angeles Lakers.

The Heat are in a 3-1 hole and huge underdogs against LeBron James and the Lakers, who will look to lock up the franchise’s 17th championship on Friday night. But Ross still has faith in Jimmy Butler to lead the Heat back from the brink.

“Congratulations if y’all pull it off, but don’t be surprised if Jimmy Jesus brings it home,” Ross said on First Take on Thursday. “I’ve watched LeBron do this before. I’ve seen him get up two games and lose the series, and I’m talking Finals guys. We’ve seen this. We’ve got a young team. Young Bam, we got Herro. Come on man, we got Robinson and the Dragon. And Jimmy Jesus.”

James has never blown a two-game lead in the Finals, so Ross might be recalling the 2011 matchup between the Heat and Mavericks. James — then with Ross’ Heat — went up 2-1 but were eventually upended by the Mavs, 4-2.

In fact, LeBron has been spectacular when he smells blood. James is 3-0 in the NBA Finals in games with a chance to clinch the championship, although he knows well that being down 3-1 isn’t always a death sentence. In 2016 he guided the Cavaliers to a title after being down 3-1 to Golden State. 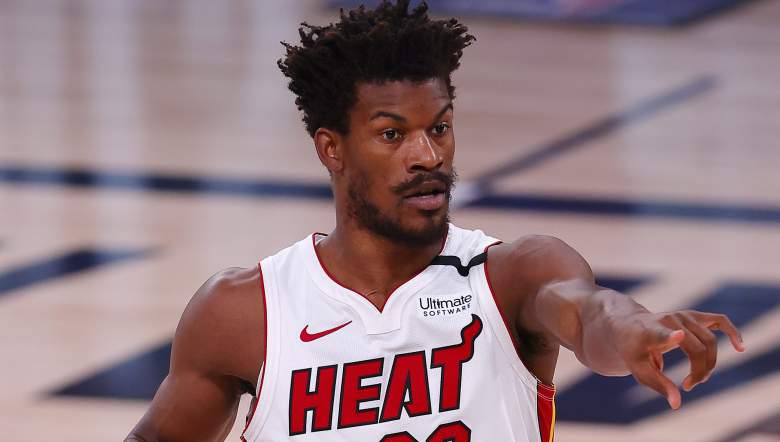 GettyJimmy Butler of the Miami Heat.

The Heat might not win the NBA Finals, but he’s propelled himself firmly into the top-tier of players with his performance this postseason. His Mona Lisa was a 40-point triple-double in Game 3 that gave Miami just a bit of hope. With some young pieces in place and cap room going forward, the Heat will be a contender for years to come.

“The city is in love with Jimmy Butler already. We love what’s going on and the energy,” Ross said, saying that Miami loves being an underdog. “We are ready for Jimmy to step up and take full control of the team. We just want him to make sure he understands we have put this entire franchise on his back. And it’s something he can handle.”

James made one of the most talked-about moves in NBA history when he left Cleveland for the purple and gold in 2018. He was injured last season as the Lakers stumbled and missed the playoffs for a sixth consecutive season.

On the verge of his fourth title with a third different franchise, James shared some insight on what makes fans in LA unique.

“Well, one, what I’ve learned being a Laker is that the Laker faithful don’t give a damn what you’ve done before,” James told reporters on Thursday. “Until you become a Laker, you’ve got to do it with them, as well.

“They don’t care about your résumé at all until you become a Laker,” James added. “Then you’ve got to do it as a Laker, and then they respect you. I’ve learned that.”

Loading more stories
wpDiscuz
0
0
Would love your thoughts, please comment.x
()
x
| Reply
Rick Ross doesn't lack any passion when it comes to his Miami Heat, but "Da Boss" might be a bit too optimistic about what is happening in the NBA Finals against the Los Angeles Lakers.