The Miami Heat is once again one of the most competitive teams in the NBA. There is no doubt that their combative spirit and their commitment to execute as best a possible Under the leadership of Jimmy Butler and Kyle Lowry, the boys from South Florida find themselves in third place in the East with at 27 wins and 16 losses.

Yet the story of their season right now might be their role players and unexpected names that are emerging to step up to the challenge of learning how to swim in the deepest end of the proverbial NBA pool.

Heat Culture is one of the main reasons why this team competed in every single game so far this season, beyond winning and losing. Although that being said, that mentality allowed the Heat to be able to come out with wins in games they had no business being in, on paper.

One of those players that truly captured the attention of the league and is still in the blossoming process is center Ömer Yurtseven.

The coronavirus limited the availability of many players in the league, and the Heat were definitely not the exception. In addition to that, injuries decimated the team up to now. Early on, it seemed as if the injuries suffered to Bam Adebayo and Dewayne Dedmon were going to complicate the team as they were bringing in a very green player into the fray.

This led to Erik Spoelstra deciding on gambling on Yurtseven. So far this season the Uzbek-born, Turkish International center has managed to being to establish himself in the best basketball league on the planet.

Yurtseven’s numbers significantly increased in the past month and now he is registering 6.8 points, 6.9 rebounds, and 1.3 assists in the 33 games that he has played up to this point .

Doc Rivers: ‘I Don’t Know Where They Keep Finding These Guys’

Yurtseven, along with the Heat’s scouting team, got a tremendous bit of praise from Sixers coach Doc River after they defeated the Heat 109-98 at FTX Arena in Downtown Miami.

This after the Turkish center after yet another double-double where equaled his career high 22 points and pulled down 11 rebounds.

“I don’t know where they keep finding these guys… It pisses me off every time I see one,” said Rivers in a jocular tone via The Miami Herald. ‘Where do the Heat find kids like this?”

Yurtseven Already Had To Be Mentally Tough To Make This Leap 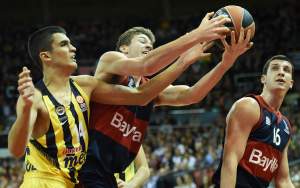 The former Fenerbahçe man spent the first years of his basketball career playing under the tutelage of the always temperamental Serbian coach Zeljko Obradovic. Although he was not part of the team, his then-teammate Bogdan Bogdanovic (now with the Utah Jazz) was on the roster for the Euroleague final that they lost to CSKA Moscow 101-96.

After that stint in 2016, he decided to test the waters of collegiate basketball in the United States with North Carolina State and then Georgetown. He eventually would land as an undrafted player in Miami.

To give people an idea of what Obradovic brought to the table, the best person to describe it was former Knicks and Blazers guard Mario Hezonja. In an interview in December, the former Barcelona man was asked how Yurtseven’s former coach would fare in the NBA, he said Obradovic would “get punched on the second practice, and they’d get fired right after that.”

Between that and having to deal with Udonis Haslem in practice, you can tell that the youngster is quite grizzled and willing to take on this challenge while helping the Heat become a much deeper side for the second half of the season and into the playoffs.

Loading more stories
wpDiscuz
0
0
Would love your thoughts, please comment.x
()
x
| Reply
Sixers coach gave a tremendous compliment to the Heat center after his performance on Saturday in a losing cause