Getty Jimmy Butler #22 of the Miami Heat looks to pass the ball against the Golden State Warriors at Chase Center on January 03, 2022 in San Francisco, California.

If one looks at the national media landscape, it is quite evident that the Miami Heat are not a topic point of preference for many pundits.

When the overall portrait of the league is drawn up on several round tables and news shows, it seems like the boys from Biscayne Blvd. seem to be relegated to a second tier in every conversation. 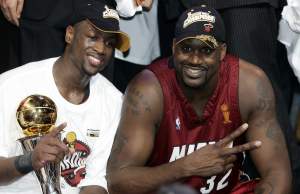 Well, the topic was put on the table by force by none other than Heat legend when his former teammate, Shaquille O’Neal decided to use the excuse of not being “full strength” as the reason for teams like the Nets and Lakers underperforming up to this point in the season.

Wade, who is a contributor to TNT’s studio coverage, came up with one of the gems of the season to counter what his former championship-winning teammate in Miami said moments before.

Shaq: “You can’t judge either of this teams (Lakers, Nets) because they’re not at full strength.”

DWade: “Shaq what does that mean? The Miami Heat haven’t been at full strength all year and they’re in first place.”

“Shaq what does that mean? The Miami Heat haven’t been at full strength all year and they’re in first place,”

“That’s not me saying it, it’s the people,” was O’Neal’s response to Wade’s rebuttal.

“This looks like a team every one in the league has their eyes on and should watch out for…the Heat have shown – with Jimmy [Butler], without Jimmy, with Bam [Adebayo], without Bam, with Kyle [Guy], without Kyle – they’re for real,” said the now Utah Jazz owner.

“They retooled in the right way. They added the right pieces. This looks like a team every one in the league has their eyes on and should watch out for. With health and the coach of the year over there, they definitely have the opportunity,” Wade added in a TNT conference call via Miami Herald.

In addition to being one of the teams with the most players minutes lost to injury and COVID protocols, they have the second most road games played this season (tied with Philly with 26, Charlotte has 28).  Moreover, they have the fifth-best record away from home in the league.

Lost in the conversation of Miami’s overall season at the national level is how they were able to overcome some dark moments of the season that if any other team would have gone through them, they might have started thinking about next year.

But that was not the case when it comes to the Heat. As an organization, they had moments were they were not very good and when they were standard bearers; in those instances, they always looked to do one thing- compete.

This year is not the exception to the rule as they found ways, players reinvented themselves and others saw their potential be maximized under Erik Spoelstra.

Through him, this team remained steadfast and maintained the eyes on the prize.

Also players like Ömer Yurtseven “pissed off Doc Rivers” and made the Heat one of the deepest teams under the basket (pending Markieff Morris’ eventual return). Also players like Gabe Vincent, Caleb Martin and Kyle Guy became contributor off the bench and dependable elements that added a great deal to the chemistry of this team.

They all bought into Spoelstra and Riley’s philosophy that have the Heat as the runaway leaders in charges in the NBA. Not saying that charges are the be all and end all of basketball indicators, but being willing to do that type of work shows a commitment that is very hard to beat down, especially when the playoff grind begins.

This is why you start seeing the intangibles and understand the origin of all that- Spoelstra himself.

So when seeing the Heat finally be placed in the national conversation, it is quite refreshing to see. Then again, who would know better about what this team is all about than the greatest Heater ever.

Loading more stories
wpDiscuz
0
0
Would love your thoughts, please comment.x
()
x
| Reply
Both teammates were in studio for TNT’s NBA coverage and it was Wade that turned the tables on his former teammate when using the “full strength” argument