Miami Heat legend Dwyane Wade is in the middle of his tour promoting his memoir, Dwyane, as well as having to deal with certain aspects of his personal life.

One of the stops that the new part owner of the Utah Jazz made during this actual media blitz was with the Daily Show With Trevor Noah. There he sat down to talk about a plethora of topics in what ended up being an entertaining segment.

Wade spoke to Trevor about life after retirement and the things that he started doing since then.  what people don’t know about Lebron James’ time on the Miami Heat, his title of “greatest karaoke singer in the league” and his song of choice, his relationship with his children and striving to be the best parent and much more.

“It is exactly what it is (memoir in pictures). I didn’t want to go at it as a words on paper.  I have already done that once and that was great. But this time I wanted to look at it in terms of my responsibility and my role and that I take it very seriously as a public figure,” Wade mentioned in regards to the motivation behind this project.

You can view the entire interview below:

“Reading something is great, but when they can actually see the image of something, someone it can actually be so much more powerful. For me, I wanted to  to show the human side of what is people look at as the athlete.”

Wade was asked about what he was able to do after he retired and his need to reidentify himself outside of the bame. .

“Basketball is what I know, from the standpoint of I focus my entire life on being great. When you try to be great, it takes up all of your attention, all of your time,”  said Wade.

“Once I got to my last year and know that I was ready to walk away, people would come and tell you, ‘You’re going to be fine, you’re going to have so many things going on.’ And I would say, ‘How? Where?’

Wade talked about where his interests lied and what he could start gaining a curiosity in and in this whole process of creation and evolution, he categorized this part of his life in a very interesting manner.

“I’m in my rookie season in life. I’m in the pregame in this new part of my life.” 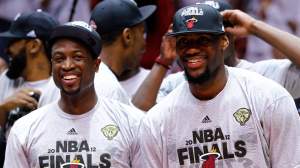 GettyDwyane Wade and LeBron James after winning a title with the Miami Heat.

One of the moments of his career that he was quite excited to talk about was from back in 2010 when the Big Three were formed.  For Wade, it was a moment where he talked about the demands and successes that were placed upon the team over at 601 Biscayne Boulevard were immense.

“I’m sure there’s a lot that people don’t understand about that,” said Wade.

As an athlete you are touted as one of the good, one of the greats of the game and they say these are the things that you have to accomplish.  You have to get rings, you have to get MVPs… so you can’t knock someone for listening to that and then ensure you make sure you put the best team you to win.

So  to be young and and as young men we decided, as friends, that we wanted to do this.  We knew at that moment that we were shifting the culture of where the NBA was. Clear empowerment, that’s what that move was.

His Dedication With His Family: ‘I Don’t Know Everything’ 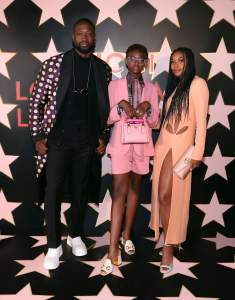 One of the aspects of his life that were always so compelling about the future Hall of Famer is the way that he used the adversities of the past that he overcame in order to be the best person possible for his and his family’s future.

He admitted that he learns but there is a special motivation behind being able to help his children in their respective journeys at this time each of their lives.

“I think when things happen and you have a personal connection you take it a little more seriously. When it happens to you, you have to look at it in the face. You have to look at it full on, like my daughter looking at me across the table.”  Wade mentioned when dealing with looking to support his daughter and her journey.

The only thing Wade said he did know at that moment is that it was “ his child”  and that he loved them and hated “the pain” his child was in because she wasn’t “comfortable” or “confident” in who they are.

“I see the light. I see in her a beautiful, blossoming 14-year-old girl,” Wade emphazised.

The three-time NBA champion will be back home on Thursday for the Heat’s clash against the surprising Washington Wizards.

One also has to point out that Wade will be part of the  Miami Heat local television broadcast of the game.  This was confirmed on Wednesday night during the  game that Miami defeated the Pelicans 113-98.

He will also be present at the opening of his exhibit over at The Shop over in Wynwood.

Heat Looking For Four In A Row

Miami will be poised to continue their great run and continue to make the top of the Eastern Conference when they face the surprising Washington Wizards on Thursday.

Loading more stories
wpDiscuz
0
0
Would love your thoughts, please comment.x
()
x
| Reply
Dwyane Wade joined The Daily Show to talk about his new memoir and touched on certain topics about his life