Getty The Miami Heat are facing roster challenges due to COVID-19 protocols.

The Miami Heat will have to now look at reshuffling their logistics during a specific portion of remainder of the season. For teams the unavoidable headache is approaching after suspensions as they did not have the required eight players in San Antonio.

The Heat’s matchup against the Spurs at AT&T Center has been moved to Feb. 3 at 8:30 p.m., the NBA announced on Monday. The game was originally scheduled for Dec. 29, but it was postponed because the Heat did not have the league-required eight available players to play, according to Anthony Chiang of the Miami Herald.

It was not the ideal solution, but seeing how things are playing out, it might be the only option that the league had at its disposal. In hindsight, the cure did more damage than the disease. Obviously the Heat were unable to play on December 29, but placing it in a space of time that complicates Erik Spoelstra’s side a great deal.

The Heat And The End Of January 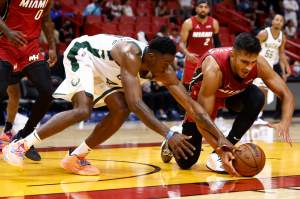 GettyMIAMI, FLORIDA – OCTOBER 21: Thanasis Antetokounmpo #43 of the Milwaukee Bucks and Omer Yurtseven #77 of the Miami Heat battle for a loose ball during the fourth quarter at FTX Arena on October 21, 2021 in Miami, Florida. NOTE TO USER: User expressly acknowledges and agrees that, by downloading and or using this photograph, User is consenting to the terms and conditions of the Getty Images License Agreement. (Photo by Michael Reaves/Getty Images)

The Heat will be playing seven games in a span of 11 days, starting January 25. The changes made by the NBA, forced them to have to reschedule one of the main games of that night as it marked Kyle Lowry’s return to Toronto. No longer is this game going to be televised nationally, according to Chiang.

More Moves On The Horizon? 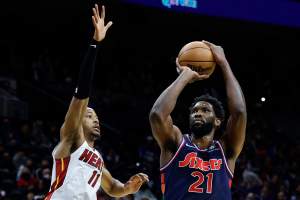 GettyPHILADELPHIA, PENNSYLVANIA – DECEMBER 15: Joel Embiid #21 of the Philadelphia 76ers shoots over KZ Okpala #11 of the Miami Heat during the first quarter at Wells Fargo Center on December 15, 2021 in Philadelphia, Pennsylvania. NOTE TO USER: User expressly acknowledges and agrees that, by downloading and or using this photograph, User is consenting to the terms and conditions of the Getty Images License Agreement. (Photo by Tim Nwachukwu/Getty Images)

With all the absences that the team suffered this year due to injuries and protocols, there is a chance that they become players market right before the trade deadline.  The big question would be how, well one report already started to have that specific scenario unfold.

Bleacher Report came out with their list of players that each of the NBA teams should look to trade and Miami had one name- KZ Okpala. Based on the article, the end doesn’t justify the means knowing what is at stake right now as trading him to “recoup” second round picks does not seem to be something that Pat Riley would even care about at this point in the game.

IF there was a feasible option to help upgrade the team, Okpala would be an interesting option.  Unfortunately, there is very little demand for him at this stage.

With all of the desperation that can emerge because of seeing others make moves, Miami might just want to stay put.  With all the complications that they dealt with and are well documented, that rough patch could be coming to an end.

In the past few days, there have not been any additional positives for COVID and the remaining players could be out of protocols in the coming days.

More importantly, some key injured players are slowly on the way back.  The first person that Heat fans and players are looking forward to see on the court very soon is Bam Adebayo. The All-Star is out since undergoing surgery on his thumb.

That being said, the current run of absences can take a toll on a team that had as much as nine players out against Golden State.

Regardless, with that many absences, Miami were still able to have one of the best four records in the NBA in the month of December.  The production from various role players and 10-day signees saw them stay afloat and make them that much more of a dangerous team to face come the end of the season.

Loading more stories
wpDiscuz
0
0
Would love your thoughts, please comment.x
()
x
| Reply
After days of speculation, the Miami Heat found out about when they will finally play the Spurs