For any athlete, a championship ring or medal is a crowning achievement. The enormity of these rings is a symbol of the sacrifice and work that these individuals, teammates and their families have to make in order to make these things happen. On Saturday, the Miami Heat saw one of their own experience what the franchise already did on three occasions.

In PJ Tucker’s case, that crowning moment was delayed as he left the Milwaukee Bucks and arrived in Miami as a free agent during the summer.

For Tucker, it was a whirlwind season as the forward started the 2020-21 season with the Houston Rockets. He went from a floundering franchise to one that eventually became NBA champs after being traded to Milwaukee in the middle of the campaign. During his time there and took part in 20 regular-season contests for his new team, making one start and recording averages of 2.6 points and 2.8 rebounds per game.

Yet it was during the playoffs that those numbers doubled en route to the team’s first league title in 50 years.

For Tucker, this ring was more than winning a title. It was the moment that was worked for during various decades. After having an All-America career at the University of Texas, the 36-year-old established a career that was truly inspiring. He entered the NBA in 2006 as a second-round draft pick by the Toronto Raptors.

However, after just one season, Tucker was already out of the league. During the next several years, he played in various professional leagues overseas. Tucker was the MVP in the playoffs of the Israeli League with Hapoel Holon, team that did break the hegemony established by European powerhouse Maccabi Tel-Aviv, in addition to stops over in Greece and Ukraine before returning to the US to join the Phoenix Suns in 2012.

For these reasons, Tucker’s message on Instagram touched many.

Imagine tryin to tell #12 that this s**t was gonna happen. Tell him that his entire life people would doubt him no matter how well he played and that at every level they would give every reason in the book why it wasn’t gonna happen. Fr this ain’t even for me.. this for the kids out there that ain’t 6”10 and ain’t jumpin out the gym. This one for the real hustlers that had to get that s**t out the mud by any means.. frfr #chaseyadreamsyoungn

Because of his tenacity, Tucker gained the respect and admiration of the fanbase and his teammates during his brief stint with the team.

Since arriving to the Heat, he proved up to now that he is a good fit with the team’s roster and culture. He has started in all of the team’s 24 games, averaging 6.6 points and 5.5 rebounds per contest.

Celebrated lots but the Bucks romped to victory 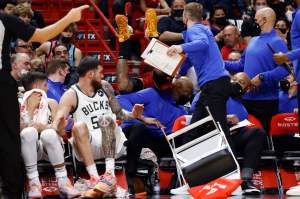 GettyMIAMI, FLORIDA – OCTOBER 21: P.J. Tucker #17 of the Miami Heat flips over the bench as he attempted to save a loose ball against the Milwaukee Bucks during the first half at FTX Arena on October 21, 2021 in Miami, Florida. NOTE TO USER: User expressly acknowledges and agrees that, by downloading and or using this photograph, User is consenting to the terms and conditions of the Getty Images License Agreement. (Photo by Michael Reaves/Getty Images)

Despite that, Miami had Max Strus as the game’s leading scorer with 27 points coming off the bench.  The Heat will now face Grizzlies on Monday before facing the Bucks again at the FTX Arena in Downtown Miami.

Loading more stories
wpDiscuz
0
0
Would love your thoughts, please comment.x
()
x
| Reply
PJ Tucker was a key part of the Bucks' title and on Saturday he was presented with his ring