The Vikings have been keeping their cards close to their chest when it comes to growing concerns surrounding Danielle Hunter.

The team scrimmaged at U.S. Bank Stadium on Friday to prepare for their Week 1 matchup against the Packers — which is 16 days away — but Hunter has yet to practice with the team, missing the past 11 practices due to a mystery injury.

While many of the game’s best veteran players have little to prove and less to prepare for during training camp, Hunter’s prolonged absence from the practice field has grown from a note to a red flag.

The details of Hunter’s injury are still unknown. Coach Mike Zimmer has kept it on the hush, telling media that it’s a “little tweak” and that he’s “getting a little better every day.”

An exchange with ESPN’s Courtney Cronin and Zimmer on Thursday hinted that Hunter’s “tweak” may be more serious than a rest-period for the two-time Pro-Bowler.

Cronin: Just addressing Danielle’s absence for a tenth day. Mike, were you expecting him to be back by this point and where’s your level of concern over where he’s at right now?

Zimmer: He’s got a little tweak.

Zimmer: Sometimes they take a long time. The injury report will come out, when is it Bob, September 6th or something?

Bob Hagan, Vikings VP of Communications: I think the 8th or 9th.

Hunter is the youngest NFL player to reach 50 career sacks and the latest Vikings edge rusher who began their career as a later-round draft pick and emerge as an NFL star. Hunter, a 2015 third-round draft pick, didn’t start until his third season and has 14.5 sacks in each of the past two years.

It’d be in the best interest of the Vikings to get Hunter involved with a young defensive line group as the team’s only bonafide starter returning on the defensive front. If Hunter is going to remain out and the nature of his injury will not be known until the week approaching their season-opener, the seriousness of Hunter’s injury could be more severe and linger throughout the season.

There’s also the possibility that Hunter sidelining himself has nothing to do with an injury but contract dealings. Hunter has been a huge bargain for the Vikings as the 12th highest-paid defensive end this season and approaching the 2021 season cap that could be hit heavily by the loss of profits this season, Hunter may be seeking a payday before the coffers run dry. He restructured his contract last season, an encouraging sign in his commitment to the team. 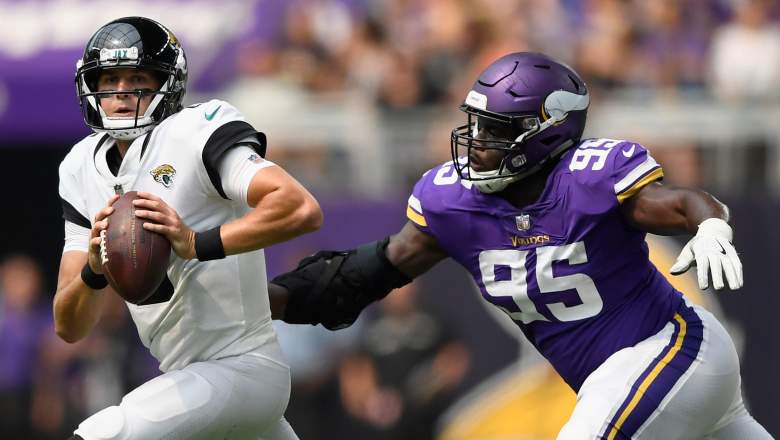 GettyIfeadi Odenigbo is the only guaranteed option as an edge rusher beyond Danielle Hunter.

Ifeadi Odenigbo is poised to start opposite of Hunter this season, but beyond him, the Vikings could get creative in the event Hunter is hampered this season. Jalyn Holmes slimmed down this offseason and moved back to defensive end after spending the past two seasons as a three-technique defensive tackle.

The Vikings are expecting to get more out of linebacker Eric Wilson who could play more in coverage and free-up Anthony Barr to be used as an edge rusher, the role he played in a 3-4 defense in college.

Free-agent adds Eddie Yarbrough and Anthony Zettel have gotten first-team reps at defensive end, while rookies Kenny Willekes and D.J. Wonnum have potential but need time to refine their technique — much like Odenigbo and Hunter went through as homegrown Vikings defensive ends.

Loading more stories
wpDiscuz
0
0
Would love your thoughts, please comment.x
()
x
| Reply
The Vikings have been keeping their cards close to their chest when it comes to growing concerns surrounding Danielle Hunter.