Getty A Pro Football Focus analyst grilled the Vikings for an offseason move they made.

Here’s a clip of his rant on the PFF Forecast podcast.

Eager went on to grill the Vikings for letting Stefon Diggs as Kirk Cousins has yet to get anyone else aside from Adam Thielen involved in the passing game. 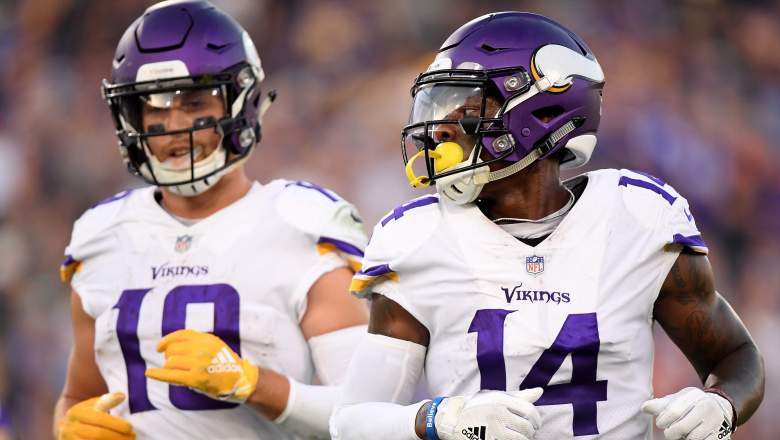 It was thought Diggs and Thielen were interchangeable as WR 1A and WR 1B after both starts emerged out of the Vikings wide receiver room. Thielen was the lone highlight of the Vikings offense in Week 1, catching six passes for 110 yards and two TDs.

But in Week 2, the Colts defense keyed in on Thielen and held him to just three catches for 31 yards on eight targets, the same target share he saw against the Packers in Week 1.

Eager made a case that Thielen’s emergence as an elite NFL wide receiver coincided with Diggs taking the majority of the pressure and double coverage from opposing teams.

The fact of the matter is some tryout guy from Mankato State was a really good No. 2 receiver when Stefon Diggs was taking all the coverage — it’s not as easy anymore.

When your No. 2 WR is Olabisi Johnson, a seventh-round pick from Colorado State, you’re gonna struggle on offense. There’s a faction of Vikings fans who think Thielen’s better than Diggs, it’s an atrocity.

Diggs has thrived with the Bills through two weeks, leading the NFL in receptions (16) and receiving yards (239) as his team is 2-0 to start the season.

While the Vikings offensive line is far from a threatening unit in the NFL, they have given Cousins the third-most time to throw in the league through two weeks. The problem? He has been waiting too long for plays to develop and hasn’t developed the trust in his other options beyond Thielen.

Cousins has targeted Thielen 16 times through two games. His next most-targeted wide receiver has been rookie Justin Jefferson, who has caught five of six targets for 70 yards. Jefferson was out-snapped by Bisi Johnson in Week 2 but has proven to be a better target. Johnson has caught four passes for 80 yards but failed to catch a pass in the Colts game that deflected off his hands and resulted in an interception.

The Vikings’ answer to taking pressure off Thielen and attracting more coverage may lie in Jefferson who has yet to be given the reigns as a starter despite him being drafted No. 22 overall to replace Stefon Diggs.

Loading more stories
wpDiscuz
0
0
Would love your thoughts, please comment.x
()
x
| Reply
The Vikings offense hasn't been the same since he left.