Getty The Vikings are 3-point underdogs to the Colts this Sunday.

It’s hard to not have a knee-jerk reaction after the Vikings’ embarrassing Week 1 loss to the Packers — and sports bettors have already shifted their interests out of the Vikings favor.

The Vikings are unanimous 3-point underdogs against the Colts across many of the premier betting websites. The Colts, coming off a 27-20 loss to the Jaguars, was not enough to sway odds towards the Vikings. A bet on either side of the spread pays at -110 odds.

The spread remains thin as bettors are anticipating a close game between two teams that are still finding their form after disappointing Week 1 performances.

The Colts will have fans in attendance on Sunday but are only allowed a maximum capacity of 2,500. Without augmented crowd noise, the Colts fan base likely won’t play a major factor in disrupting communication on the field.

Colts Unbeaten Against the Vikings This Millenium

The Colts have won the past five meetings with the Vikings, dating back to 1997 when the Vikings last beat the Colts.

The only time the two teams have met with coach Mike Zimmer with the Vikings resulted in a 34-6 Vikings loss in 2016. The previous three meetings all were decided by three points, aligning with Sunday’s spread. 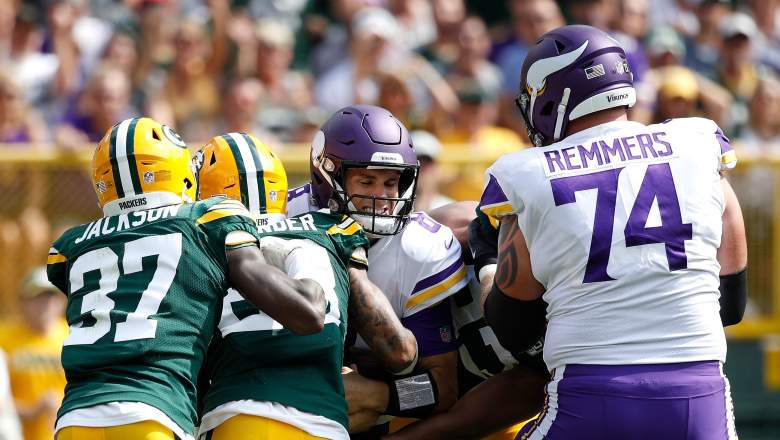 Kirk Cousins gave up a safety and an interception to the Packers in the first half of the Vikings’ season opener.

The Vikings opened the 2020 season with one of the most brutal defensive performances in Zimmer’s tenure with the team, offering an opportunity to improve as it couldn’t have gotten much worse against the Packers. The Vikings gave up the most points and second-most yards (524) in Zimmer’s seven years with the Vikings in a 43-34 loss last Sunday.

Failing to pressure Aaron Rodgers, the future Hall-of-Famer picked apart a young Vikings cornerback room, throwing for 364 yards and four touchdowns. The absence of defensive end Danielle Hunter, who was placed on injured reserve last week, hurts the Vikings odds of getting after Rivers this week. Add in that the Colts have NFL’s best offensive line, per Pro Football Focus, and it could be tough sledding for the Vikings defense once again.

Built on a zone-run scheme, the Vikings gameplan will be to consume time of possession and keep the ball out of Rivers’ hands, who threw for 363 yards, a touchdown and two interceptions in Week 1. The Vikings had only 18 minutes, 44 seconds time of possession last week, which was the lowest amount in franchise history.

Vikings running back Dalvin Cook played on just 58 percent of the Vikings’ offensive snaps as Minnesota trailed most of the game after giving up 14 points in the final minute of the fourth quarter after a safety and interception committed by Kirk Cousins.

Cousins and the offense recovered in the second half but couldn’t keep pace with Rodgers. He finished the game with 259 yards and two touchdowns.